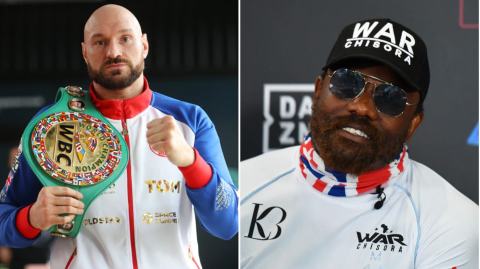 Tyson Fury and Dereck Chisora have agreed terms for a world title fight on 3 December.

After talks to fight Anthony Joshua once again fell through, ‘The Gypsy King’ is now expected to defend his WBC heavyweight title against old rival Chisora in Cardiff later this year, according to the Telegraph.

The two have fought on two previous occasions, with Fury defending the British and Commonwealth titles via unanimous decision in 2011.

They met again three years later with the Manchester heavyweight securing an even more dominant win, forcing a 10th round retirement in a victory that earned him his world title shot against Wladimir Klitschko.

Fury has claimed that an official announcement is imminent.

‘Hey guys, second session of the day. Absolutely smashing it,’ Fury said on his social media channels on Saturday. ‘December 3, I’m coming for you.

‘We’re about to announce an opponent this week some time. Get up there my boy. Cardiff here we come, get up.’

38-year-old Chisora has 33 wins and 12 losses on his 45-fight record, losing to current IBF, WBO and WBA heavyweight champion Oleksandr Usyk in 2020 before back-to-back defeats to Joseph Parker. The Londoner returned to winning ways in September with a hard-fought victory over Kubrat Pulev.

Manuel Charr has also been in the running to fight Fury in December, indicating last month a deal had been agreed. Charr, 37, has fought twice in the last five years.

After a fight between Fury and Joshua fell through so spectacularly last year, there appeared to be renewed hope when the former offered his British rival a shot at this WBC title last month.

Joshua accepted Fury’s demands of a 60-40 split of the fight purse and for the fight to take place on 3 December.

However, no deal was struck with negotiations between Matchroom and Queensberry, who promote Joshua and Fury respectively, ending last week.

Joshua, who suffered defeat to Usyk in their August rematch, is also expected to fight before the end of the year with 17 December a likely date for his return.