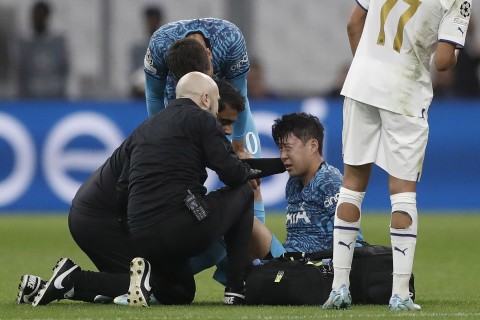 Tottenham forward Heung-Min Son is in danger of missing the World Cup with South Korea after the club confirmed that he will undergo surgery on a fracture around his eye.

The 30-year-old was forced off during the first half of Tottenham’s 2-1 win over Marseille in the Champions League on Tuesday evening.

Son’s eye was immediately swollen as he left the pitch and Spurs have now announced that he will require surgery to repair the damage around his left eye.

Son now has less than a month to recover ahead of the World Cup as South Korea’s opening Group H fixture is against Uruguay on November 24.

A statement from Tottenham on Wednesday evening read: ‘We can confirm that Heung-Min Son will undergo surgery to stabilize a fracture around his left eye.

‘The South Korea international suffered the injury during the first half of Tuesday’s UEFA Champions League victory at Olympique Marseille.

‘Following surgery, Son will commence rehabilitation with our medical staff and we shall update supporters further in due course.’

Speaking after Son’s injury on Tuesday, former Liverpool and England defender Jamie Carragher branded FIFA’s decision to allow the World Cup to be held midway through a domestic season as ‘absolutely disgusting’.

Son becomes the latest Premier League player who is in danger of missing out on the tournament as Manchester United defender Raphael Varane is currently recovering from a hamstring injury he suffered last month.

Liverpool’s Diogo Jota will also be absent for Portugal’s World Cup campaign due to a calf injury, while France will also be without N’Golo Kante and Paul Pogba.

‘I think it’s an absolute disgrace that the World Cup is in the position that its in, for lots of reasons,’ Carragher told CBS Sports.

‘It was corrupt that Qatar were given the World Cup, we knew that at the time. They campaigned on having it in the summer, it is impossible there to have a World Cup in the summer with the temperature, it gets moves to the situation where it is now in the middle of the season.

‘Players who spend their whole lives dreaming of playing in a World Cup and now could be [out] – as we’ve seen with Son, players all around the world, [Raphael] Varane was crying coming off the pitch at Stamford Bridge. That’s how close we are to a World Cup.

‘An injury, a 10-day or a two-week injury, is going to keep players out of a World Cup and it should not be happening.

‘And it all started with FIFA giving Qatar the World Cup and then moving it. I think it’s absolutely disgusting.’