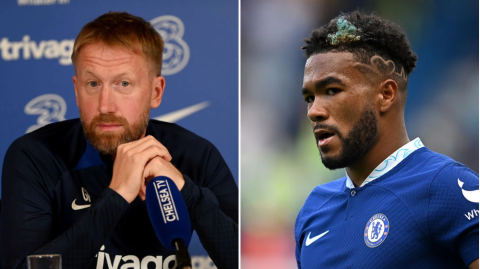 England star James had to be subbed off midway through the second half of Chelsea’s Champions League win at AC Milan on Tuesday night with a knee injury.

There are now major fears James could miss the upcoming World Cup, with England boss Gareth Southgate expected to name his final squad just before the last round of Premier League games on November 13-14.

Speaking at his pre-Aston Villa press conference on Friday afternoon, Potter confirmed James was being sent to a specialist over the weekend to determine the extent of his injury setback.

‘Reece is due to see a specialist over the weekend,’ Potter said. ‘Until we get that information there’s not too much I can add unfortunately.

‘It would just be speculation from my side so we’ll wait and see. He felt not too bad yesterday but until you get these things checked you never know.

‘We need to get it checked with the specialist and then we’ll know how we can move forward. We’ll see.’

Chelsea have won four games in a row under former Brighton manager Potter, climbing into the top-four places in the process.

On Sunday, the Blues face an Aston Villa team who sit 16th in the Premier League, having won just two of their nine league games this season.

Asked about the threat of Villa, Potter added: ‘The margins are very small in the Premier League. I’m sure Steven [Gerrard] will want to improve their results and is looking at this game to do that.

‘We need to make sure we’re ready for the challenge. I think everyone knows in the Premier League there is always someone under pressure. At the moment it’s Steven but he has the quality and experience to deal with that.’