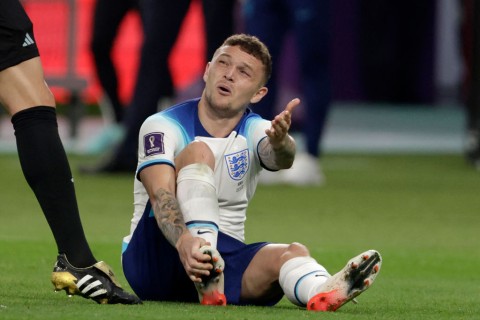 Former Chelsea and France defender Frank Leboeuf has aimed a bizarre dig at Kieran Trippier before England face Les Bleus at the World Cup in Qatar.

Newcastle United right-back Trippier was an unused substitute as the Three Lions smashed Senegal 3-0 in the last 16 on Sunday.

He came off the bench in the 3-0 group stage win over Wales, playing the last 35 minutes – and started England’s two other games – a 0-0 draw with the United States and a 6-2 thumping of Iran.

Trippier could return to the starting XI when Gareth Southgate’s side face France in the quarter-finals on Saturday, with many calling for England to set up with a back five instead of the back four they have used so far in the tournament.

Trippier helped his club Newcastle beat Leboeuf’s former side Chelsea just before the World Cup break – with the Magpies above the Blues in the Premier League – and the Frenchman has now aimed a dig at the 32-year-old defender.

‘Football has just changed so much in recent years; and that lack of physicality in the game is the reason I’m less interested in it right now,’ Leboeuf told Ladbrokes at the launch of their World Cup Free-To-Play Halftime Quiz.

‘You saw in England’s opener against Iran, Kieran Trippier was complaining about somebody stepping on his toes.

‘It’s something you’ll see probably 10 times a game nowadays, and I can’t believe it.

‘Maybe they’ve completely changed the fabrics of the boots or something, but that never, ever happened in my time.

‘A player would step on your foot, for sure, and you’d say, ‘Wow, okay, that hurts’. But you’d get on with it and maybe do it back to him next time.

‘But now, someone steps on your toe and it’s this huge deal and the game stops to check you’re okay. It’s completely different.’