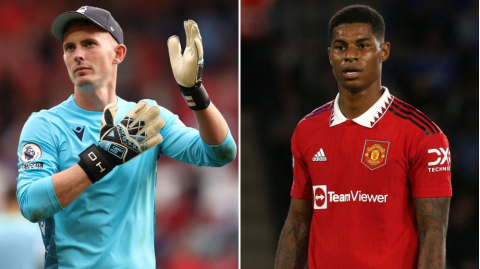 Manchester United’s Dean Henderson has opened up about training with Marcus Rashford and says he is the hardest hitter of a ball he has ever faced.

Henderson, currently on loan at Premier League side Nottingham Forest, has known Rashford for a long time with the duo progressing through the youth academy at Old Trafford after arriving from Carlisle and Fletcher Moss Rangers.

The pair both came through in 2015-16, with Rashford being handed his United debut by Louis van Gaal and Henderson sent out on loan to Stockport County, and the ‘keeper provided key insight on his team-mate in a Q&A with Sky Sports.

After revealing that Manchester City’s Joe Hart was his biggest idol growing up, Henderson was quizzed on which player he has faced with the most power and said: ‘Either Harry Kane or Marcus Rashford.

‘Rashford can slap it, mate. Marcus will be eight yards away, he won’t care you’re in the way, he’ll just slap it straight at you.

‘It stings so much, especially in the winter time! He just doesn’t care about the goalies, I’ll be honest! Not a nice feeling sometimes.’

"These are break up songs hopefully you don't break up" 😅

It follows a turbulent period for Rashford, who had struggled for form and fitness in the last 18 months and was even linked with a move to Paris Saint-Germain.

Henderson, meanwhile, slammed United last month for breaking their promise to make him the club’s new No.1 goalkeeper.

He was limited to just three appearances across all appearances last term, a season after he massively impressed on loan at Sheffield United in the top-flight.