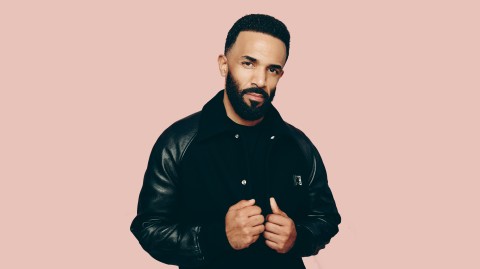 He is the king of reinvention. Since rising to fame at the end of the last century when he featured on Artful Dodger’s Re-Rewind, Craig David carved out a solo career, clocking up his own Number One tunes and a host of awards.

He then re-emerged again with TS5 and in September released his eighth studio album, 22. He’s also written an inspirational book called What’s Your Vibe? Subtitled: Tuning In to Your Best Life, this isn’t your typical autobiography. Waterstones has described it as ‘combining chart-topping pop music with the theories of Carl Jung and Brene Brown’.

Unlike many artists, Craig has stayed grounded and grateful through it all. Speaking on Zoom in front of a hot pink tropical backdrop, he’s all smiles as he reflects on a crazy few months.

‘This is the apex of everything coming together at the same time, it feels very divinely timed because the album was slightly pushed back, then the book came early, so it’s like, wow, this is literally landing at the same time. It was intense but it felt great!’

Craig is performing his TS5 DJ sets at Hits Live next week alongside the likes of Olly Murs, Sam Smith, Tom Grennan, KSI and more, and is all set. ‘It’s a great opportunity to play a megamix of things where I can do a verse and a chorus of a song and then chop into something else.

‘As a DJ it’s one of the most gratifying things. I used to have competitions with other DJs back in the day of vinyl of how quickly we could get the vinyl ready to mix in the next song,’ he grins.

It seems that that competitive streak is still there. ‘I’m gonna really relish the opportunity and especially being in arenas again, and landing those songs in that time.’

He makes sure to look back to where he started, too: ‘I remember going to clubs and watching a DJ – it’s a real art form to be able to recognize what the crowd are into, what they’re liking, what they’re maybe not feeling in a song, even. It’s about being able to cut out of it quick enough before someone goes off to the bar!

Walking Away is a big song of mine, but I know that in the context of a 20-minute set, you might want to hear it over Dr Dre and for me to sing the acapella over the top instead.

‘I tailor it, and I kind of love that,’ he smiles with pride. ‘I’m as passionate as I was when I was 16-years-old and I first got into music, so I treat performances with the utmost pride.’

Born in Southampton, Craig was raised by his mum after his parents divorced. His father also makes music and took him along to dance halls, where a young Craig would take the mic. He jokes that if he were to try and tell his 16-year-old self that he would make a 22-year (and-counting) career out of music, that he wouldn’t have listened and would just want to know when he got to be on Top Of The Pops.

Now 41, he has a fresh perspective on his career and what matters to him. Hence the book.

He started writing about his life during lockdown, and the resulting tome hit bookshelves last month. Part memoir, part self-help, the book sees Craig talking about key moments in his life and career and also giving advice to the reader. It’s been warmly received, and many readers have praised the star’s honesty.

Its success has come as a surprise to him: ‘I feel like there’s this ebb and flow of life and my career. I’d been asked to do a memoir before, but I just felt like there’d be someone else out there who could write that book that would have more detail and more clarity on things that I probably had forgotten about,’ he admits.

Craig wanted to do something different: ‘I wanted to write a book that actually could land and hopefully help people, to almost demystify and remove the role that we’re playing, and just get back to human connection,’ he explains.

He recalls spending many a late night on the book over lockdown, figuring out what to include. He didn’t want it to be solely about the music, either. ‘I wanted to talk about some of the things underneath the hood of my songs, we can go back to childhood, lean into having weak boundaries and depression.

‘Talk about when you said yes when you meant to say no and people-pleasing. It all gives context to the music though!’ He recently revealed that severe pain saw him spiral into a depression after a back injury sent him into a ‘dark place’, a world away from the smiling figure I meet.

Earlier this year, he also featured in an NHS campaign alongside other famous faces to address the importance of talking about mental health.

He gestures to the room around him: ‘I love these Zoom calls, because I get to see someone’s little world, and I get to feel that vibe from them. Like, “Wow, that’s a new relationship that I didn’t have, 20 minutes before”, so it’s fulfilling for me.

‘I never take this for granted, and I say that when I get on stage, that it’s a privilege to be there and to hear people singing the words back to me of my song.’

Craig has previously been very private about his life, so fans have seen a new side to him over recent years, thanks in no small part to his appearances on podcasts.

He opened up on the likes of Fearne Cotton’s Happy Place and Steven Bartlett’s Diary Of A CEO, discussing his mental health, bullying, his humiliation in public thanks to Leigh Francis and Bo Selecta’s mockery of him and more: ‘I saw the response to openly talking about things publicly and wearing my heart on my sleeve.

‘People are relating to me in a very different way… I think of it like a stone, this effect of throwing into the sea, and it ripples out. If in five years’ time, someone says, “Hey, I picked up your book when I was randomly in a bookshop, I opened the page, and it inspired me”, my job’s done here.

‘That’s what this is about, if we can help someone using a platform, then it’s a job well done.’