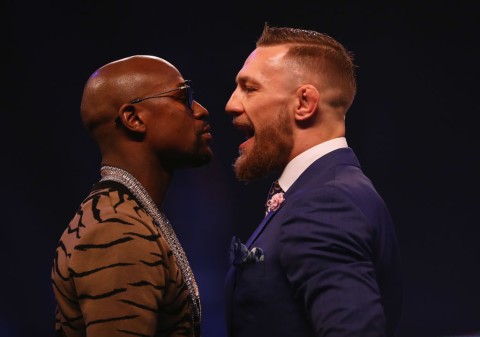 Floyd Mayweather Jr has confirmed plans to fight Conor McGregor for a second time in 2023.

The five-weight world champion retired from boxing in 2015 but was tempted back for a showdown with UFC icon McGregor two years later.

Mayweather eased to a 10th round stoppage win in their 2017 bout to extend his professional record to 50-0, surpassing Rocky Marciano’s long-standing 49-0 record.

The American has since been involved in a number of lucrative exhibition bouts, taking on Logan Paul in a non-scored bout in June 2021 with a meeting against Japanese MMA fighter Mikuru Asakura taking place in Saitama this weekend.

But another meeting with McGregor is on the horizon with Mayweather confirming he is in final negotiations with the Dubliner, in a bout that could be once again fought under professional rules.

‘I want to go out there this weekend and have fun [against Mikuru Asakura]. Then I have another exhibition Dubai in November and me and Conor McGregor in 2023,’ Mayweather told The Daily Mail.

‘We don’t know if it’s going to be an exhibition of a real fight. But there’s been talks of both. I would prefer an exhibition.’

When asked why he would prefer an exhibition, Mayweather said: ‘I am not into fights where I am going to take any real punishment.

Mayweather vs McGregor still stands as the second highest-grossing boxing match of all time with ‘The Money Fight’ generating 4.4million PPV buys worldwide.

McGregor is nearing the end of his recovery from a broken leg suffered in his trilogy fight against Dustin Poirier last July.

The 34-year-old has lost three of his last four fights in the Octagon with his return – in MMA or boxing – pushed until 2023 as he prepares for his Hollywood debut, starring alongside Jake Gyllenhall in a remake of the classic movie Road House.