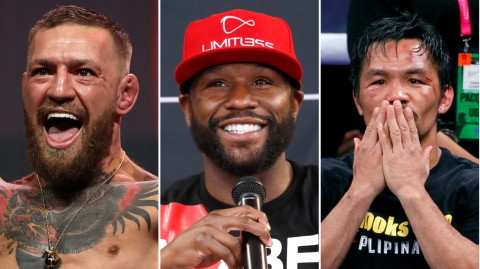 The former five-weight world champion is set for another huge payday as he continues his exhibition world tour against YouTube star and content creator Deji, with the two set to meet in Dubai on 13 November.

Mayweather could bank up to $30million for his bout against the 25-year-old Londoner, the younger brother of KSI who won his first bout in four attempts in August.

The fight has been organized and promoted by Global Titans, whose CEO Singh has shared a good working relationship with Mayweather for much of the 2022, hopeful further fights with the 50-0 boxing legend can be delivered in the coming years.

After years of waiting, Mayweather and Pacquiao met in 2015 in a bout which still stands as the most lucrative boxing fight of all time, with the American’s showdown against double UFC champion McGregor in 2017 the second highest grossing event in the sport’s history.

While Mayweather recently downplayed talk of a second meeting with Pacquiao, be it under professional or exhibition rules, Singh says there have been discussions with all parties to deliver a huge fight towards the end of 2023.

‘Floyd is a businessman,’ Singh told Metro. ‘For him, and he mentioned this in the press conference in Las Vegas, that if we are talking a real fight, a minimum purse of $100million, if that’s on the table I think that will be a real possibility. But we will have to ask Floyd if he is ready to fight Manny.

‘But there are great names out there. Conor and Manny, we all want to see those rematches. But again, once a promoter puts that kind of money on the table, I think that is possible.’

He added: ‘We would love to continue to work with Floyd in the future but we haven’t had a deal of that nature at the moment. But we will see how this fight goes [against Deji] and it will be of course something we discuss at the table with him while he is in Dubai. For him to be continuing with us for next year and the year after.

‘Those kind of fights do take a while to confirm but discussions have started. That is why any big fights like that we will look at for the last quarter of next year. It is not an easy game to be in but it is exciting and rewarding.’

Pacquiao, who retired from professional boxing last year following a bruising defeat to Yordenis Ugas, is set to follow Mayweather into the world of exhibition boxing at the end of the year against South Korean martial artist DK Yoo.

And whether it is against Mayweather, McGregor or another prominent name, Singh hopes to have the Filipino fight legend as part of the show.

‘100 per cent we want him on board. Conor, Manny, yes we will,’ Singh said. ‘And we are talking to them and their teams.’