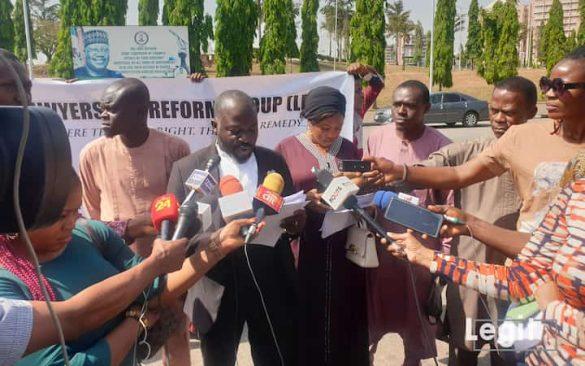 On Thursday, December 1, legal practitioners of the Lawyers For Justice Reform launched an appeal during a press briefing demanding the immediate removal of Okotete.

The legal practitioners are seeking her removal because of a series of financial fraud allegations against her and her unqualified status as the executive director of NEXIM Bank.

Reeling out her resume, Aare Oladotun Hassan, the executive director of the group and secretary of the Epe Branch of the Nigeria Bar Association (NBA), said Okotete does not have the requirements to land her the job.

Hassan noted that a petition had long been submitted in 2018 seeking her removal despite considerable evidence by the senate committee in charge.

Stella Okotete’s real qualifications exposed He said Okotete does not meet the criteria of 18 years of mandatory experience in financial matters, and 13 of the 18 years must be in the banking sector.

Hassan said: “Her relied well scripted and fraudulently concocted CV (Currently under scrutiny); which only has her records as a former Counsellor and beauty Salon Hairdresser and Spa Operator before her appointment to the most exalted position as the Executive Director of the apex financial institution regulating Nigeria’s Exports and Imports Businesses: NEXIM BANK.”

“In compliance with the Central Bank of Nigeria Act Regulations and Order 41(3) of the Senate Rule and by the reason for her lack of capacity not to have served in the banking service for 18 years and must have risen to the level of General Manager for two years, hence she is not fit and merit to continue to hold the Executive Director of the NEXIM BANK, we, therefore, call on President Muhammadu Buhari to act decisively accordingly.”

Meanwhile, Hassan urged President Muhammadu Buhari to order the prosecution of Okotete for the alleged misappropriation of funds in her office.

Hassan stated that a deadline of Wednesday, December 7, will be given to the federal government, while failure to act will lead to litigation against President Buhari