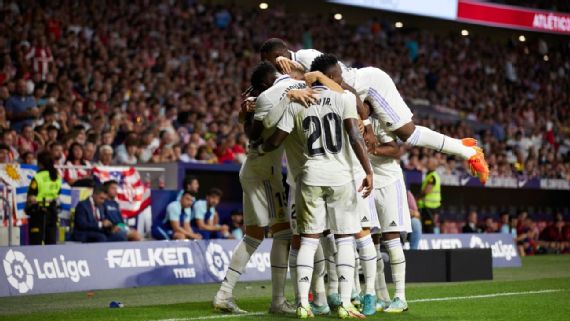 Real Madrid saw off crosstown rivals Atletico 2-1 in a fiery edition of the city’s local derby at the Wanda Metropolitano on Sunday to restore their two-point lead over Barcelona and stay perfect in LaLiga.

Despite being second best for large periods of the first half and playing without talisman Karim Benzema, Carlo Ancelotti’s side were ruthless in front of goal as strikes from Rodrygo and Federico Valverde put them in a commanding position. Mario Hermoso pulled a goal back for the hosts late on but they were unable to find an equaliser.

The visitors ceded position in the opening minutes of the first half, but took the lead before 20 minutes when Rodrygo smashed home a classy finish past Jan Oblak from Aurelien Tchouameni’s chip over the Atleti back line.

After the match, Vinicius, who had been the subject of racist abuse in Spain before the weekend, tweeted a picture of him celebrating with his Selecao teammate Rodrygo, writing: “Dance wherever you want.”

A blazing run into the area from the red-hot Vinicius Junior led to Real’s second goal as Valverde pounced on a rebound and buried a first-time shot after his Brazilian teammate close-range toe poke had caromed off the near post.

The hosts battled to get back into the game and managed to halve the deficit late in the second half when a corner kick took a fortuitous bounce off Mario Hermoso and sailed into the back of Thibaut Courtois’ net.

The equaliser never came for Atleti as Carlo Ancelotti’s side held on for the result to pick up a big three points in the early stages of their LaLiga title defence.

“We’re very happy,” Dani Carvajal said of his team’s spirit after the match. “We came here to win. I think we played a really good first half, especially the first 30 minutes, we took our two chances. In the second half we didn’t have as much of the ball to hurt them. We were comfortable at 0-2. It got more complicated at the end but they’re three points.

“Karim is fundamental for us, but we have a spectacular squad. Rodrygo played as our number nine today and he scored a great goal, he gave us a lot in attack.”

Victory means Real return to the top of the LaLiga table on 18 points from six games, two ahead of Barcelona in second. Atleti are seventh, eight points behind their neighbours.

“It leaves a bad taste,” Oblak said after the match. “We’ve lost the derby, we’ve lost a very important game. I don’t think we were so bad, we didn’t deserve the defeat. But that’s football, they took their chances and we didn’t. The feeling is always bad when you lose. We’re all sad.”