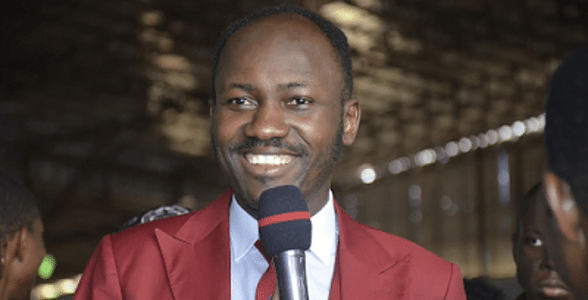 God is good, especially if you’re a Nigerian pastor with some business savvy. These days, millions of souls, desperate for financial breakthroughs, miracles and healing, all rush to the church for redemption. And while the bible expressly states that salvation is free, at times it comes with a cost: offerings, tithes, gifts to spiritual leaders, and a directive to buy literature and other products created by men of God

Pastors are no longer solely interested in getting people to Heaven; they’ve devised intelligent ways to make good money while reaching out to souls. This skills and enterprise has undoubtedly sustained them for years in ministerial work.

Take Archbishop Margaret Benson Idahosa, for example. She is the general overseer and lead pastor of the Church of God Mission International, CGMi, a thriving congregation with branches in Africa, America, Asia, Europe and other parts of the world. Yet she owns a group of schools, the Idahosa estate, a television station, and more.

Many other Nigerian pastors are similarly building multi-million dollar empires from their churches. Today, pastors fly around in private jets, drive fancy cars like Daimlers, Porsches and BMWs, don Rolexes and Patek Phillipes, and own breathtaking mansions all over the world.

Lots of our readers requested to know the richest pastors in Edo state, Nigeria. So I set out to investigate the assets of some of Nigeria’s most prominent pastors, and I came up with conservative estimates of their fortunes.

One of Nigeria’s most controversial preachers, Johnson Suleman, is the wealthiest preacher in Edo State. Ever since he founded the Omega Fire Ministry, it has grown to become one of Nigeria’s largest congregations. The OFM headquarters, where he hosts multiple services every Sunday, is Edo state’s largest worship center, with a seating capacity of 20,000. Suleman owns a private jet, an alleged 1Billion Naira home in Auchi Edo state, and homes in Europe and the United States. He also owns Celebration TV, a thriving mass media company that publishes all his content. He also owns a filling station, hotels, shopping complexes, water factory, a transport company and a restaurant he just recently built to feed 1000 people for free everyday.

Most Reverend Dr. Mrs. Margaret Benson Idahosa is the Archbishop and general overseer of CGMi. She’s a record breaking female icon in Nigeria haven become the first Pentecostal female bishop in 1998, Nigeria’s first female chancellor of a private university, the first female Archbishop in the history of Pentecostal worship in Africa, and the proprietress of Nigeria’s largest Nursery, primary and secondary school with 108 branches nationwide.

She presides over hundreds of thousands of worshippers worldwide with a 5,000 capacity Faith Arena (global administrative headquarters) and a 30,000 capacity Balm of Gilead city campground all in Benin city Edo state.

Osazuwa is one of the very few pastors in the state who shuts down Benin City every year with praise programs.

The Pastor has remained in the news for years over affiliation with senior political office holders as his events are majorly stormed by politicians every year including governors, ministers, sitting and ex presidents.

Dr. Felix Omobude is the general overseer of the Gospel Light International Ministry a.k.a New Covenant Gospel Church, rector of lighthouse polytechnic, and is the immediate past National President of the Pentecostal Fellowship Of Nigeria PFN where he served two terms. He is a very influential, widely travelled and respected man of God who has pastored Christians successfully for 50years as at March 2022.

Pastor Sam Osaghae  is the founder of Believers Ministries Int’l with thousands of members on 4 services every sunday. The church is rumored to have one of the largest congregations in Benin city. He is a simple preacher who also mantras the ‘Teach Us To Pray’ program which has impacted millions. His City wide crusades has seen the healing, deliverance and impartation its attendees.

Pastor with high taste Dr. Abraham Chigbundu, is one of the foremost apostles of deliverance in Nigeria having functioned in that ministry for over 4 decades. He is a very senior spiritual son to Papa Ayo Oritsejafor and presides over thousands in the int’l mega cathedral of the Voice Of Freedom Ministries Worldwide, GRA, Benin City, Edo State. He is a very classy clergyman with over 10 mansions round the nation, private businesses and investments – including a petrol station and a secondary school – expensive regalias (plus several multi carat pure gold bishopric chain),  and a presidential protocol of mobile policemen armed to the teeth.

Evangelist Kingsley who is popularly known as Singer Preacher is the founder and senior pastor of Renewal Evangelical Ministry (REM); a church with thousands of members.

Jeffery Iyonomwan is the founder and senior pastor of Miracle Assembly with its headquarter church in boundary road, GRA Benin City. Pastor Jeff is a man of God who’s ministry is centered on building young professionals and career men. To that effect, he convenes young professionals, industry executives, the political class and more every year in his business and mentorship programs. He is personally a businessman married to Pastor Loveth Iyonomwan who assists in pastoring the church.

Following the demise of the founder of Christ Apostolic Church Of God Mission, CACGM Apostle Dr. Samuel E. Ogbomwan,  his brother Bishop Godspower was installed as the new General Superintendent of the ministry. Godspower A. Ogbonmwan JP was born in 1948, is an elder in the Pentecostal Christian denomination in Edo State and has been in ministry for decades. His leadership has grown the CACGM to enviable heights.

Pastor Stephen Illori is the Edo State Pastor of Living Faith Church aka winners chapel with its mega state headquarters in Km 10 Benin – Sapele road Benin City. Illori pastors a flock of over 20,000 worshipers in multiple services every Sunday while he presides over every other winners chapel branch in the entire state.