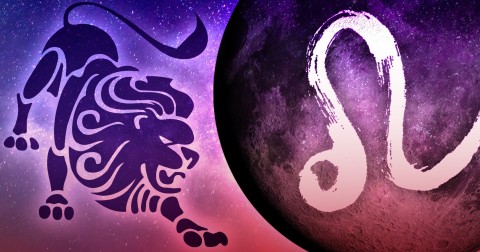 New Moons are a time for activation, initiation, creation, and go-getting ambition.

It’s time to make a start on new adventures, goals, projects, and activity. You are brimming with energy and enthusiasm, invest it wisely into something that will bring positive rewards.

The New Moon in Leo highlights the aspects of that sign – socialness, confidence, self promotion, ambition, attention, likeability and progress on whatever ladder is being climbed.

It’s a great time to reinvent yourself socially or professionally, ask for a promotion or raise, make new friends and expand your circle, put forward a new pitch, proposal or idea. Seek that centre stage!

Let the tarot and astrology give you a nudge as to what form of self promotion you should activate this New Moon, with a tarot card pulled for each star sign ahead, plus its meaning.

You can get past this obstacle.

Tarot card for Aries for the New Moon in Leo: Nine of Wands

Meaning: There’s a project, relationship or role you’ve been embroiled in and which has recently revealed an obstacle, issue or problem that has put it all on pause.

You think this is going to be tough to overcome. The Nine of Wands promises that it isn’t.

So, this New Moon, try a new approach that emphasises your own charisma, charm and personal presence (i.e. a face to face talk) and get past it. On the other side of this hump lies smooth seas and plain sailing.

Tarot card for Taurus for the New Moon in Leo: Page of Wands

Meaning: Shake it all up, Taurus, and try something new at least twice a week for the next fortnight – socially, that is!

Go to new venues, try a class, reunite with an old friend, suggest a new activity, visit that place you keep you meaning to go in, walk a different route, join a group.

The Page of Wands urges you to experiment, have a go, give it a whirl.

Nothing to lose and maybe lots of new friends (and more) to gain.

Be bold and just make that decision.

Tarot card for Gemini for the New Moon in Leo: Two of Swords

Meaning: This New Moon sees you dwelling on a decision related to your self promotion and progress.

Should you or shouldn’t you? I don’t know, Gem, it’s up to you but you have to make this decision now, and get it done.

Pick the route that has the most potential, and maybe risk too.

The Two of Swords shows you need to decisive here and to have faith in the choice you make (do not second guess and unpick your decision).

Unlock your potential and be bold.

Tarot card for Cancer for the New Moon in Leo: Three of Cups

Meaning: YOLO. The Three of Cups has major ‘do what you enjoy’ vibes, because life is short and we’re here for a good time, not a long time.

Create the best ever social calendar you could ever dream of over the next two weeks. Hang out with people you love and like, take a trip, ask your crush out, visit the hottest places in town, start a new hobby, visit family, travel.

Pack as much in as you can because you’re ready for action.

Tarot card for Leo for the New Moon in Leo: The Star

Meaning: Make a wish, Leo, because The Star grants you a cosmic dream come true this New Moon, related to your social life or your most heartfelt ambitions.

This might be the time to apply for that dream role, ask for the promotion, put your idea or pitch forward, ask them out, rekindle the friendship you most miss, or start your side line.

Think carefully what you’re going to focus on and give it your all, you’ll go further and faster than you think is possible.

Your friendships and love life get a boost this New Moon.

Tarot card for Virgo for the New Moon in Leo: Ten of Cups

Meaning: Your friendships and love life are in the spotlight this New Moon and whatever you wish to activate there can be done.

The Ten of Cups sprinkles magical fairy dust over your relationship landscape, making people receptive to your ideas, and open to taking things to the next level, whatever that means.

Focus on the connections you value most and make those bonds even deeper and stronger. You are loved and liked.

Shout about what you’re up to.

Tarot card for Libra for the New Moon in Leo: Eight of Coins

Meaning: A little bit of showing off and self promotion will help attract help, support and much needed input into a project, task, or job you’ve got on that has become super hard.

The Eight of Coins asks you not to give up here, or stop trying. I know it’s been hard, but it is all worth it.

This New Moon, be the squeaky wheel. Ask for what you need to keep going. It will be delivered and will help you crack on with gusto.

Could travel be on the cards?

Tarot card for Scorpio for the New Moon in Leo: Queen of Wands

Meaning: Broaden your horizons, throw off the shackles, escape, liberate yourself, be dynamic and bold and head off on a big adventure this New Moon.

Travel is well starred for you right now, Scorpio, with the ever-moving and exploring Queen of Wands. Book that trip you always wanted to take, head out to visit someplace inspiring, create a quest for the coming summer weeks.

If you could do whatever you wanted to for a summer jaunt, what would it be? Do it!

Tarot card for Sagittarius for the New Moon in Leo: The Wheel of Fortune

Meaning: Time to take a chance! The Wheel of Fortune invites you, this New Moon, to gamble on something you have been thinking about activating. Do it now. What’s really to lose?

Whatever happens, there’ll always be new choices and potential pathways.

One decision only opens up more options.

Stop overthinking this and just do it. Spin that wheel of fortune and change your world.

Time to put the wheels in motion.

Tarot card for Capricorn for the New Moon in Leo: The Hermit

Meaning: The Hermit asks you to apply the theme of self promotion and confidence to a long-held, serious ambition of yours.

Consider and then push out of your (shy, modest, self reliant) comfort zone and shine a light on this goal.

Take things to the next level.

Tarot card for Aquarius for the New Moon in Leo: Two of Cups

Meaning: Your love life is the area in the spotlight this New Moon and doing something new could make a real difference, for the better.

Wherever you’re at in love, head to the next step.

Tarot card for Pisces for the New Moon in Leo: The Emperor

The Emperor gives you full permission to do it your way, push your agenda, get things working how you want them to, make it happen for yourself.

Take an ambition, shine a light on it, make a bold leap on achieving it, and the Universe will rise to meet you and bring opportunity and good fortune to help.