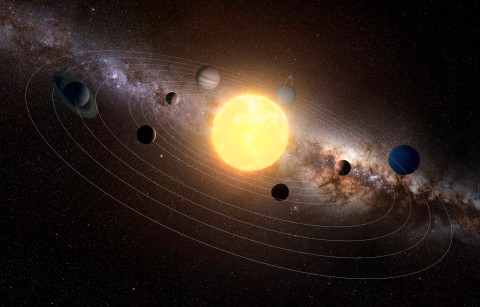 Deep in the outer reaches of our solar system, could a mysterious planet be tugging on the orbits of smaller objects in the distance?

For years, some astronomers have thought such a planet – too small and distant to spot easily from Earth, but just big enough to leave traces of itself in the orbits of other objects, might be lurking just out of sight.

Referred to as Planet Nine or Planet X, the gravitational influence of this hypothetical world could explain strange movements of bodies called extreme trans-Neptunian objects (ETNOs). These objects seem to cluster in surprising ways.

But a study has poured cold water on what many astronomers already regard as an unlikely explanation.

To explain the clustering, Planet Nine would need to have a mass about five times that of Earth, and orbit the sun at a distance of a few hundred to a thousand astronomical units.

It would orbit very slowly and likely wouldn’t give off all that much heat.

To try and find such an object, researchers from the Open University trawled through two infrared sky surveys taken more than 20 years apart: one from Nasa’s infrared astronomical satellite (IRAS) and one from the Japan Aerospace Exploration Agency’s AKARI space telescope.

The lengthy gap between the two surveys would theoretically give a planet with even a very long orbit time to shift.

An artist’s impression of how Planet 9 could look.

Researchers Chris Sedgewick and Professor Stephen Serjeant found about 500 potential planet candidates while probing the surveys. They then took a closer look at each one, examining infrared signatures.

But on closer inspection, none of them appeared to come from an object like the proposed Planet Nine.

Instead, they largely seeme to come from sprawling clouds of gases known as galactic cirrus. These large dusty veils tend to obstruct astronomers’ views of deeper space.

Although a stealthy planet would be a satisfying explanation for the strange orbital gymnastics of our solar system, astronomers have proposed other explanations including massive disks that affect ENTOs and even black holes.

Its also possible that the celestial objects cluster randomly and temporarily, and astronomers just happened to observe them at such a point.

Whatever the true explanation, the new paper — which will be published in the Monthly Notices of the Royal Astronomical Society — puts Planet Nine even further down the list.