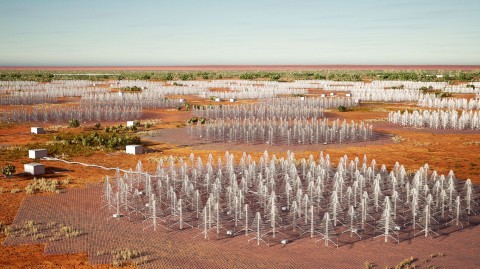 The world’s largest radio telescope has begin construction and, once operational, will let scientists peer further into the universe than ever before.

The Square Kilometre Array (SKA) will comprise 197 dishes and 131,027 antennas spread out across Australia and South Africa.

Construction Commencement Ceremonies have taken place in Western Australia and South Africa’s Northern Cape with the building expected to be completed by 2028.

The huge scientific apparatus will help scientists understand the origins of the universe as well as test theories like general relativity.

Of course, it could also help us in the search for alien life.

‘I have been involved in the SKA and its precursor telescopes for the past ten years, and as the chief operations scientist of the Australian telescope since July,’ explained Cathryn Trott.

‘I am helping to build the team of scientists, engineers and technicians who will construct and operate the telescope, along with undertaking science to map primordial hydrogen in the infant universe.’

‘Astronomers like me will use the telescopes to trace hydrogen over cosmic time and make precise measurements of gravity in extreme environments. What’s more, we hope to uncover the existence of complex molecules in planet-forming clouds around distant stars, which could be the early signs of life elsewhere in the universe.’

Although the antennas will be in Australia and South Africa, the headquarters of the enterprise will be located in the UK just outside Manchester.

South Africa said it will add 133 dishes to its 64-dish MeerKAT radio telescope to create its portion of the Square Kilometre Array.

‘Today has huge significance for all of us … working towards building a large, exploratory instrument that can serve our community and advance a number of scientific frontiers,’ Joseph McMullin, deputy director-general at the SKA Observatory (SKAO) intergovernmental organisation said.

Australia and South Africa have been chosen as the sites because of their remoteness and existing telescope arrays.

MeerKAT, which will be incorporated into SKA-Mid, has delivered images of phenomena including stellar nurseries and the chaotic region around the supermassive black hole at the centre of our galaxy, some 25,000 light-years from earth.

The dishes are designed to connect with each other to form one giant telescope and with the new additions, expected to be operational by 2030, enhanced image clarity and resolution.