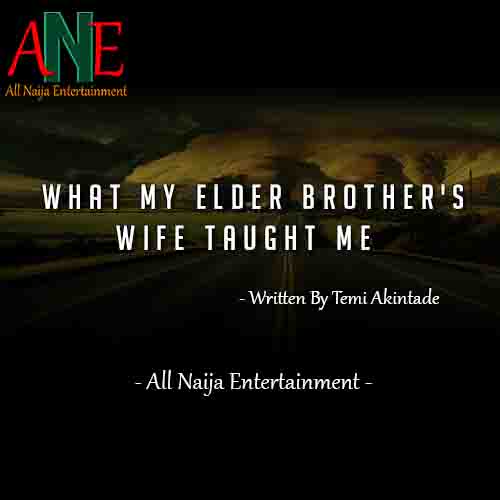 It’s been 4 weeks since Chinomso gave me the unfortunate letter. And even though the letter was currently lying on my bedside stool, I didn’t spare it a glance. I rose from my new 4 inches sized bed and stood at the window.

Chinomso’s mini-mansion was in view. There were few but shady trees in the compound. The mango trees produced lush yellow fruit and the frangipani trees that lashed against the window panes when it rained. Every morning, I would watch the gardener trim the hibiscus flowers and the other yellow flowers which Chinomso called tulip. While the house helps Chinemerem the sixteen-year-old boy they just brought from Aba last month would sweep the large compound clean until there were no traces of green and yellow leaves.

That was the way Chinomso swept me up with his offer. He offered me a one-bedroom apartment in one of his boys’ quarters plus the benefit of eating three square meals a day. While I took out time to work out my salvation according to him. I took up his offer because I was stranded and needed a place to stay.

That morning, I was on a fast. I had gone to the church beside the house since it was a deliverance church for them to conduct deep deliverance for me. It was during the deliverance session that one of the pastors told me that he saw me in a revelation, a light-skinned woman was laying a curse on me. Immediately, my mind traveled back to my elder brother’s wife. She was the only person who was light-skinned. Nuru’s wife was dark-skinned.

I moved away from the window and sat on the bed. I opened the Bible, and my prayer point booklet fell. I picked it and glanced through the list. It was an endless list of prayer points but I was tired of praying the prayers it was more like I was firing bullets but the person is not even affected. Just last month, I heard that my brother’s wife recently bought a Toyota matrix for herself.

‘My enemy is supposed to be dead or suffering not alive and feeding fat!” I poured out my frustrations one night to Chinomso and his wife.

“Who told you she is your enemy?”

“See let me offer you a bit of advice. Pray with no one in mind. However, have a specific prayer point in mind. Be focused and finally pray the prayer of mercy even if you do not have any more prayers to pray.” He said.

That night, I started with the prayers of mercy. It was boring at first, then I opened my eyes only to realize that I had fallen asleep while praying. So it was morning. I didn’t lose focus. I continued to push through the fast until I was done.

“I thought that something would happen,” I told Chinomso when we went to one of his shops in Gwarimpa.

“I was thinking that God will show me a vision as you had. I saw and heard nothing.” I was officially fed up.

He laughed. “God may not show you immediately. It may take seconds, minutes, hours, days, weeks, months, or even years.”

I was discouraged but I didn’t let it show. I even suggested to him to let me manage one of his shops but he had told me that the Holy Spirit told him not to give me anything but his word. It sounded offensive at first but later, I left him and his Holy Spirit.

I got a sales boy job at a super-store close to the house where I was paid twenty thousand naira per month. The store owner was a kind man, haven understood my situation, he makes me the supervisor even though my salary stayed at that amount. I worked as a supervisor until November that year. I suddenly became tired and desperate about my condition so I resigned from the job.

On the night I resigned, I knelt beside my bed with tears rolling down my flat cheeks. I wanted God to show me what Chinomso saw in the Bible that made him rich. My Bible was placed in front of me and so I cried out to God to show me the way else, my last option would be to do rituals and I wouldn’t mind using my brother’s wife since my mother was dead.

I didn’t see anything…

Finally, I opened my Bible and the first place I saw was the scriptures that say, Jesus Christ, became poor so that we will be rich in him. I thought I was dreaming. If Jesus Christ became poor for me then I am not supposed to be poor. I jumped to my feet, excited about this truth then I wrote it down. Each day I began to confess this new truth to myself loudly such that Chinemerem would think that I was crazy.

One afternoon, I was reading through my Bible since I had nothing to do when I came across John 3:16. I stopped and read through the scripture again. Why would God give us his only begotten son to die for my sins? If God loved me that much even when I was a sinner, why shouldn’t I love him back? Tears filled my eyes.

All my life I haven’t been shown the right kind of love. Or at least, God’s kind of love except for Chinomso. Chinomso loved me even though I was ignorant of the God we were serving. He loved me even when I insulted him and accused him of being a ritualist. Somehow, that broke me and I began to cry. I begged for God to forgive me that night and I asked him to become my saviour and friend again.

After that night, it was as though my life changed. I studied the King James Bible that Chinomso got me, and I began to pray target specific prayers. Prayer points that God gives to me.

One night, after reading the story of Jabez from the Bible, I got on my knees and began to ask God to change my story! “Powers from my father’s and mother’s house that does not want my story to change let them die! In the name of Jesus Christ. I prayed that single prayer until I fell asleep then I had a dream. And in the dream, I was given a key.

When I told Chinomso about the dream the following day, I asked him if God was telling me to go and sell key holders or go into key production.

“No now. I think that is the key to your breakthrough. The breakthrough you have been looking for.”

It was in the fifth month of the third year since I started living at Chinomso’s house when suddenly, Chinomerem the house help opened my eyes to a business idea.

“Uncle, I thought you know how to barb hair. Why don’t you start one from home here?”

My head clicked. I use to be the best barber at Nuru’s shop. And so, I bought the idea and told Chinomso about it. He supported me and gave me a go-ahead. By early June, everything I needed to begin a new venture was ready. My clipper, banner, and some hair treatment.
Chinomso began to refer his customers to me and I began my business. Others from the neighborhood also began to come around.

After several months of barbing, I had a dream and in that dream, someone told me, “Why don’t you learn how to plait braids?”

I told Chinomso about the dream and he advised me to dedicate some hours in a day to learn it. I enrolled to learn in a nearby shop. At first, my new madam was surprised that a full-grown man like me wanted to learn how to plait hair. I stayed with her learning how to wash and relax, fix and plait as well. I also learned manicures and pedicures and within 6 months

I became a name in the community. Then one night I had another dream.