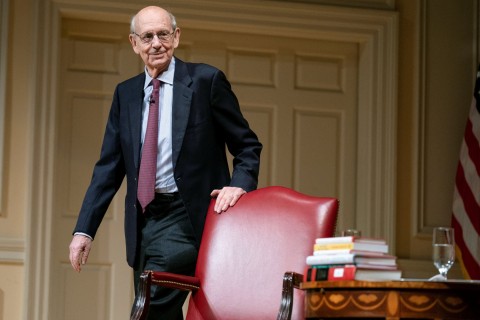 Former Supreme Court Justice Stephen Breyer, in his first televised interview since retiring in June, said he did ‘everything’ he could to try and prevent the court’s reversal of Roe v Wade.

The 84-year-old liberal justice retired shortly after the court issued its ruling in Dobbs v Jackson Women’s Health Organization, which overturned the landmark 1973 ruling in Roe that established the constitutional right to abortion in the US.

The decision in Dobbs favored the state of Mississippi, allowing a ban of most abortions after 15 weeks of pregnancy.

Raising his voice, the retired justice added: ‘Was I happy about it? Not for an instant. Did I do everything I could to persuade people? Of course, of course.’

He also warned his colleagues against writing ‘too rigidly,’ saying he found himself dissenting in numerous historically consequential cases where the conservative majority was unwilling to bend.

‘You start writing too rigidly and you will see, the world will come around and bite you in the back,’ Breyer said. ‘Because you will find something you see just doesn’t work at all. And the Supreme Court, somewhat to the difference of others, has that kind of problem in spades.’

Breyer’s comments come as the Supreme Court is about to begin a new term on October 3, when newly appointed Justice Ketanji Brown Jackson, the first black woman to sit on the high court, will take his place.