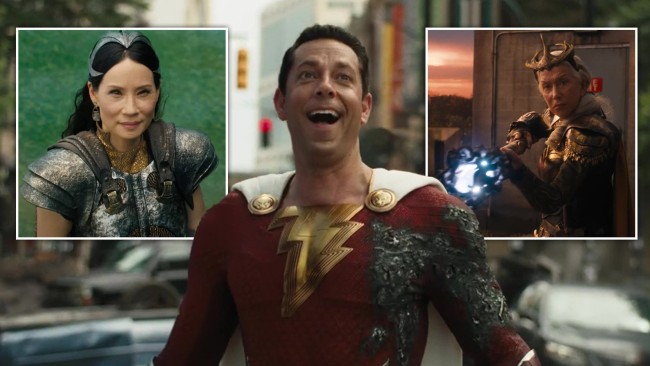 Shazam! Fury of the Gods is getting ever closer, with a trailer released at San Diego Comic Con showing Zachary Levi, Dame Helen Mirren, and Lucy Liu in action.

Zachary is set to reprise his role as  Shazam, aka Billy Batson, the teen who transforms into a superhero when he utters the word ‘Shazam’.

The trailer opens with Billy doubting himself, saying: ‘I don’t deserve these powers if I’m being honest. Like what am I even contributing?’

However, he has to face up to his powers, and quickly, as he and his foster siblings (who now also have powers) face the wrath of the gods, including Lucy’s Kalypso, and Dame Helen’s Hespera.

Hespera tells him: ‘Children stole the power of all the gods! This is very personal, Billy.’

The teaser goes on to include a tongue-in-cheek reference to Dame Helen’s role in the Fast and Furious franchise, with Billy telling her: ‘Look, I might not have as much experience as you because I’m not super old like you, but I’ve seen all the Fast and The Furious movies, lady. It’s all about family!’

We also get a first glimpse at Rachel Zegler’s character (which is still being kept under wraps) and teases some epic battle scenes, including a showdown with a massive dragon.

Sandberg joked: ‘It’s a sequel now, so we got more money, and we spend it all.’

He was also asked whether Superman will appear in the film, coyly answering: ‘I can neither confirm nor deny allegations such as these.’

Dame Helen and Rachel then made a surprise appearance via video link, with the Hespera actress declaring: ‘Zack, darling? I had such a marvellous time kicking the s**t out of you. P**sy power!’

The original Shazam! was released in 2019 and was a box office success, as well as being widely praised by critics.

Elsewhere at SDCC, Dwayne ‘The Rock’ Johnson rocked up in his full Black Adam gear to promote the upcoming flick, which is also a spin-off of Shazam!.

The Hollywood star made an epic entrance onstage at the famous Hall H and warned fans that the superhero universe would ‘never be the same again’.