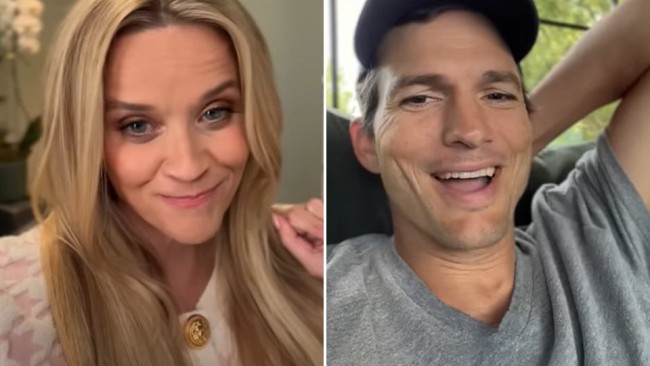 In some good news for your Monday, Reese Witherspoon and Ashton Kutcher have revealed they will star in a new rom-com coming to Netflix.

During the streaming platform’s Tudum event, the stars said they will join forces for Your Place Or Mine, set to be released February 10, 2023, just in time for Valentine’s Day.

In a humorous video released for the event, we see Reese, 46, chat with Ashton, 44, in a video call as they engage in a fun back-and-forth about their respective careers.

Reese asks her co-star if he’s excited to reveal their upcoming project before Ashton has a fun little game for them to play.

He asks the Legally Blonde star which actor she would want to make a rom-com with.

Reese reveals her picks, Cary Grant and Tom Hanks, before That 70s Show heartthrob Ashton says his dream co-star would be Reese.

As Reese thanks him for ‘the nicest thing he’s ever said to [her]’, he responds: ‘It’s a great line, it worked on Natalie Portman and Cameron Diaz. It’s a lady killer.’

Your Place Or Mine will tell the story of two long-distance best friends, Debbie (Reese) and Peter (Ashton), whose lives change when they switch houses and lives for a week as Debbie decides to pursue a lifelong dream and Peter volunteers to look after her teenage son as she does so.

The film will be directed by Aline Brosh McKenna, best known for her work on Crazy Ex-Girlfriend as a producer, and the writer of The Devil Wears Prada, Morning Glory, and Cruella.

Your Place Or Mine will be released on Netflix on February 10, 2023.