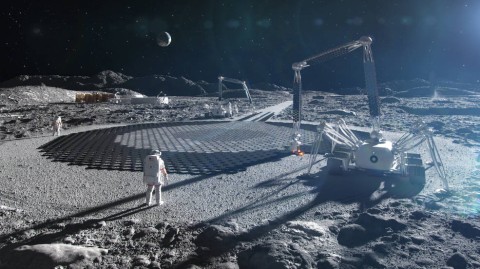 Nasa is investing in developing technologies to build landing pads, habitats and roads on the lunar surface.

New technologies are required to meet the unique challenges of living and working on another world, so the US space agency has awarded ICON, a $57.2 million contract to do just that.

‘In order to explore other worlds, we need innovative new technologies adapted to those environments and our exploration needs,’ said Niki Werkheiser, director of technology maturation in Nasa’s Space Technology Mission Directorate (STMD).

‘Pushing this development forward with our commercial partners will create the capabilities we need for future missions,’

The contract runs through 2028 and has a value of $57.2 million (£46.8 million). The award will build on ICON’s commercial activities and other work with Nasa.

Developing technologies to build landing pads, habitats, and roads on the lunar surface are in the works

In 2018, ICON built the first-ever 3D-printed home in the United States and has since delivered entire communities of such houses in the US and Mexico.

The company launched Project Olympus in 2020, reasoning that its tech could help build critical infrastructure like landing pads, roads and habitats on the moon and Mars.

ICON has already built a 1,700-square-foot simulated Martian habitat, called Mars Dune Alpha, which NASA will use to train astronauts for long-duration missions.

Ultimately, Nasa hopes to establish a base on the moon and send astronauts to Mars by the late 2030s or early 2040s.