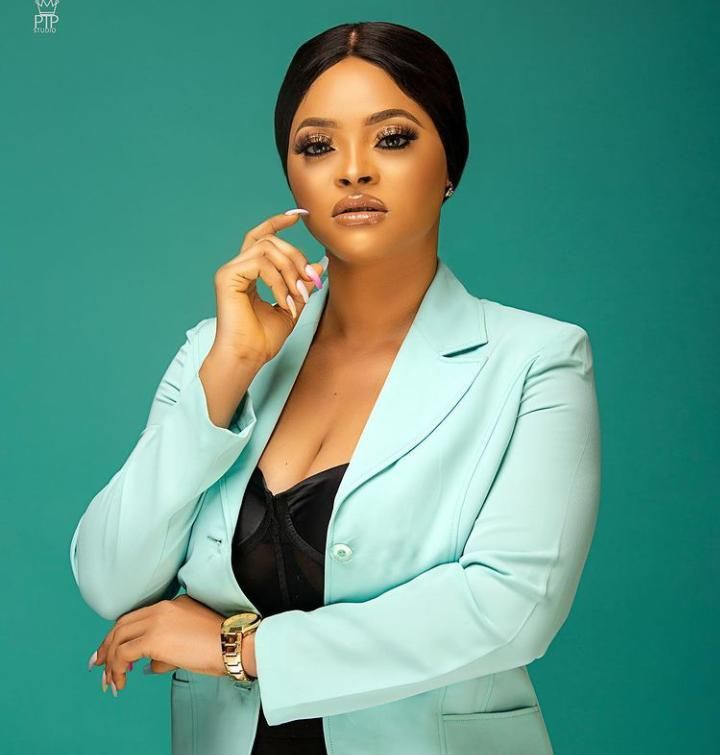 For my secondary education, I attended Paradise Group of Schools in Benin, Edo State. I went on to study English and Literature at the University of Ibadan, Oyo State. I underwent the National Youth Service Corps scheme at an airforce base in Port Harcourt, Rivers State.

I have always had the passion to be an actress from childhood. My parents also motivated me. I don’t think I have scratched the surface as an actress. There is still so much more I have to give. There are many dimensions people have not seen me in. I have done so much this year, but I am hoping for more challenging roles.

My experience in the industry has not been rosy. There were times that I got frustrated and tired. But, I feel that is what corporate workers go through as well. I have friends who have nine to five jobs and they tell me about their experiences too. However, God has been faithful.

I cannot really mention any challenges I am facing in my career at the moment. I would have said travelling a lot is a challenge but it is part of the job. At times, I could be away from home for a month and not have time for myself. There are other times I tried to delve into other businesses but acting is such a jealous job that needs all of one’s time and effort. Also, I have little time for my family.

Compared to two years ago, I have grown. People now recognize me more and love my work. I love the fact that my movies touch people and make them happy. I wish to do more.

The key factor that brought me this far is my talent, not my beauty. Every movie role I play has stood me out. I want people to recognize me for my performances and the attention I pay to every role I play.

The Nigerian audience would be judgmental if I act nude, but they would later understand and agree with the (my) reason for acting nude. What I said (in an interview) was that is it really worth it to go nude in a film? Is it compulsory I go nude to better play a particular role? Are the filmmakers trying to imitate a real life situation? Will going nude help to make any impact on the film? What is the future of the film and which production company is doing the film? Those are the questions I would ask myself. One Asaba director or YouTube film director cannot call me to show parts of my body. I would not even answer them.

People that show some parts of their bodies are those who have watched some Hollywood films (where such was done). Actors should be able to act with the whole of their being. Actors are supposed to ‘lose’ themselves to the characters they are portraying.

There is no formula to having a lasting relationship, or one’s partner respecting one. I have had friends that had sex on their first dates and some of them are married, while some are still dating their partners. A lady can ‘stress’ a man that is wooing her and the man could still dump the lady after she finally agrees to date her.

Love is not enough to keep a relationship. A man does not have to be extremely rich. Another thing to look out for is if he has prospects and is hard-working. A man does not need to break the bank to please a woman; the little things matter and are just as important.

Respect is also very important in a relationship. One can love and not respect the other person. The man has to see me as he sees himself. His family also has to accept me. The sex has to be good as well.

However, I can never quit my career just because my partner asked me to do so.

Every part of my body is fascinating.

Some fans used to send me unsolicited nude pictures. It hurts my eyes. Most times, I ignore them or block them.

Men should be responsible for their partners’ bills if they want women to respect them. If I am the one taking care of my responsibilities, why should I be ‘extremely’ submissive to a man? Men should ask themselves if they come through for their women when they need them. Women see relationships as a money-making venture, not as a sex-making (sic) venture. Why should a man not want to spend money on a woman but want to keep having sex with her?

These days, women don’t even need men to pleasure themselves. There are gadgets that are even faster and sweeter than men (laughs). Why should a broke man even date a lady? A man should be able to feed himself first before thinking of going into a relationship. Dating a woman is a responsibility, and it helps to train the man to be more ‘manly’, so that when he gets married, it will not be a big deal anymore for him to take care of his family.

I have got favours from men because of my beauty. I don’t see it as a big deal. As a matter of fact, I actually get more favours from women than men.

One major downside of being an actress is that there is an assumption that most actresses are into ‘runs’ (prostitution), and that is incorrect. There is also another wrong assumption that all the men are sending messages to actresses on social media (laughs). This is even as some people think that actresses are saucy and bougie. However, I think that is for people who do a lot of photo shoots and are always looking glamorous. Some actresses are very homely but only those who come close to them will know that. I feel every career has its downsides.

My parents have always supported my decision to become an actress.

My biggest cheerleaders are my sisters, parents, and my friend and colleague, Etinosa Idemudia. I have other friends who have been amazing too. My fans have also been there for me.

My beauty routine is basic. I just wash my face with a face scrub and I apply face cream at night. I always have my sunscreen on, especially when I am going into the sun. Once in a while, I scrub my skin as well.