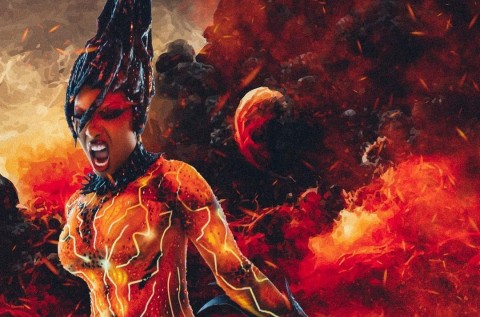 Megan Thee Stallion was having a Hot Girl Halloween – as the rapper, 27, showed off her absolute scorcher of an outfit.

Megs, who tagged her snap ‘Hottieween’, sent temperatures soaring on the spookiest night of the year.

Squeezed into a skintight burnt orange and black bodysuit, the demon musician appeared to have been fashioned from the fires of hell… certainly a look to rem-ember.

Meanwhile, Lizzo, 34, showed that she nose the holiday is the best time to make a muppet of yourself as she paid a playful homage to Miss Piggy.

The Good As Hell singer aimed sty by replicating the TV puppet’s iconic photo shoot, posing with a fake snake draped around her.

Elsewhere, Kendall Jenner, 26, was as cool as a cucumber in her sharp costume.

Lizzo as Miss Piggy for Halloween

The reality star and fashionista had taken inspiration from a video – which went viral online – of her awkwardly attempting to chop the vegetable.

Last but not least was Heidi Klum, 49, who got her wriggle on as a gigantic worm, in gruesome head-to-toe prosthetics. The German model was joined by her soul-bait Tom Kaulitz as a fisherman with a bloodied eye. Consider us hooked!