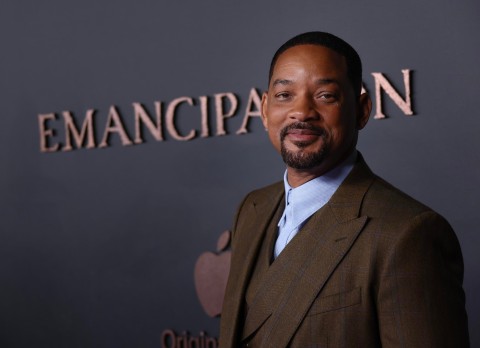 To borrow from Charles Dickens, for Will Smith it has been the best of times, the worst of times. This year, his role in King Richard won him a first Oscar – moments after he shocked the world by slapping Chris Rock during the ceremony, overreacting to an ill-timed gag aimed at his wife, Jada Pinkett Smith.

The Academy banned him for ten years, his buoyant public image tarnished. Now he’s back with harrowing historical drama Emancipation, playing true-life Louisiana slave Peter. It’s an incredible performance that in any other year would net him another Oscar nomination.

How does he feel? Is this his comeback movie? ‘I haven’t thought about it that deeply,’ the 54-year-old says, when we meet over Zoom, Smith dressed in a shiny grey suit. ‘I am consumed with the importance of the message of the work.

‘My hope is that Antoine [Fuqua, director] and all the artists involved with this film won’t be penalized for my action. I think the film is spectacular. And my hope is that people will be moved and transformed by it.’

Smith has told host Trevor Noah on The Daily Show about the ‘bottled rage’ building inside him before he hit Rock. That night, fellow actor Denzel Washington warned Smith – a devout Christian – that ‘the devil comes for you’ at your highest moment.

Today, when I ask how he has reconciled experiencing such career highs and lows simultaneously, he cites his 2021 memoir Will, when he delved into a childhood living with a violent, alcoholic father.

‘Probably about two years ago… I started exposing aspects of myself that I had hidden from myself, for my entire career. I confronted things in my life that I had put off. So I wrote my book.

In the dark days since the Oscars, his Emancipation character, Peter, has been a source of comfort. ‘Peter was embracing his suffering and even finding a way to be grateful for it,’ he says.

‘So he has gotten me through many a difficult night with the understanding that suffering – even when self-imposed – when it is embraced through faith and by working to get your heart to a loving space, is always leading [you in] the right direction. Peter has been very, very helpful for me over these past seven months.’

Smith also fell back on very personal inspirations. ‘For Peter, my grandmother was front and centre. She passed about ten years ago. But I knew making a movie where the character was centred on his faith, and his faith in God was the way that he was going to make his way through his adversities…I knew my grandmother was applauding from the other side. She was in my mind almost every day.’ The Baptist-raised Smith, who grew up in Philadelphia, calls her his ‘conduit’ to God.

‘I felt like my grandmother had a first-hand relationship with God. And I knew I couldn’t hear God, but I felt like she could.’

Family is huge for Smith (he has two children, daughter Willow, 22, and son Jaden, 24), and there were tears when he told Trevor Noah about his nine-year-old nephew Dom, who asked him on Oscar night: ‘Why did you hit that man, Uncle Will?’

‘I have always had people close to me that I’m trying to please,’ he tells me. The sense that he let down those around him on Oscar night is palpable.

Right now, he’s on a path to forgiveness.