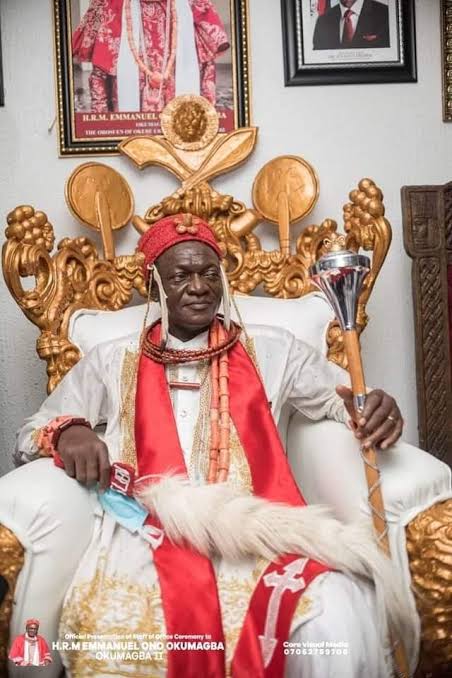 The formal announcement of the demise of Okumagba The Second was announced on Sunday by the Otata Of Okere-Urhobo kingdom, Warri, Chief Gold Eburu, a retired Brigadier-General, at a press briefing held at the Orosuen palace.

The people of Okere-Urhobo Kingdom and a retinue of chiefs were also in the palace of the departed king during the announcement.

The covering of the Royal stool of the Oroseun of Okere-Urhobo Kingdom with black cloth was also a sign that the kingdom was mourning.

Briefing journalists, Chief Gold Eburu stated that, “His Majesty, Okumagba The Second, had travelled to join his ancestors.”

Eburu said the final rites of passage would be announced later.

Consequently, the Otata of Okere-Urhobo Kingdom disclosed that “the Council of Chiefs has directed that, in line with the customs and traditions of Okere-Urhobo Kingdom, no ceremonies such as burials, marriages and others would take place within the kingdom until after the celebrations of the final rites of the Okumagba The Second.”

He appealed to all residents of the kingdom to remain peaceful and law-abiding.

The departed monarch was crowned on Monday, November 16, 2020, by kingmakers in Okere-Urhobo Kingdom led by the oldest Kingmaker, High Chief George Amurun.

The Delta State Government on Tuesday, December 22, 2020, confirmed his selection as the Orusuen (King) of Okere-Urhobo Kingdom in Warri and went ahead to present him a Staff of Office on Tuesday, January 5, 2021.

The departed Okumagba The Second succeeded His Majesty, Paul Oghenero Okumagba, Idama II, a former Professor of Sociology at the Sociology Department of Delta State University, Abraka, who passed on in July 2019.