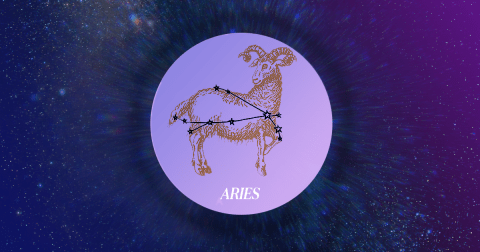 Aries is known as the baby of the zodiac, being the ‘youngest’ star sign, spanning the first 30 degrees of celestial longitude, and originating from the constellation of the same name.

These rams are fire signs, and their ruler is mars, which makes for a big old temper, and plenty of passion.

However, there’s lots more going on for dear Aries, and it’s important to remember that no one person can be defined by their sun sign alone.

This is where the sun was positioned at the time of your birth, and while it can provide insight into your traits and life trajectory, you will need to check your birth chart for your moon sign, rising, and other factors to get a bigger picture.

If you’re an Aries and want to find out more about your sun sign, though, here’s everything you need to know.

Much like the ram – and their ruler mars, the god of war – Aries are known for their headstrong personalities. You do not want to argue with an Aries, because things can escalate quickly.

Instead, leave an Aries to cool off, when they’ll be able to think more clearly and not be ruled by their temper.

That’s not remotely all that an Aries person will be, though. As a cardinal sign (which loosely translates to ‘important’) they’re great leaders, and able to move through work and life with a focus that many of us are extremely jealous of – looking at you Pisces.

Sometimes this sense of ambition can cause trouble, with a tendency among Aries’ to act now and consider the consequences later, especially if those consequences don’t apply to them but to others.

This is also partly due to Aries’ status as the astrological ‘baby’. Some astrologers believe that the signs learn from those that went before, but with Aries being the first in the zodiac, they’re a little more green and naive, which can be a good or a bad thing depending on the moment and person.

The best things about an Aries person is their positivity and direct approach. You won’t need to worry if they’re thinking something but keeping it to themselves, because they just don’t have the time or inclination to play games.

You’ll love their sense of adventure and willingness to jump right into whatever they do, even if this does sometimes result in a bit of impulsivity.

The best matches for an Aries are Gemini, Leo, Sagittarius, and Aquarius.

Gemini and Aries work well together due to their similar natures when it comes to trying new things. They both compliment each other, too, because they prefer a certain amount of distance and prefer short bursts of time together with plenty of fire.

Fellow fire sign Leo is a good match with Aries due to their sense of competition. Both natural leaders, you don’t intimidate each other with your larger than life personalities (which can be a problem with other signs). Leo compliments an Aries’ impulsivity with their planning and organisation.

Another great pair with an Aries is Sagittarius. Neither of these signs harbour their emotions deep inside, and Aries is one of the few signs able to easily deal with Sag’s lack of tact (after a quick outburst, that is). This is a coupling with a lot of physical compatibility, so expect an almost competitive sex with life, with each of you trying to up the ante.

Although not as explosive as Aries/Gemini, pairing an Aries with an Aquarius could result in a wonderful partnership. This couple both value their independence, and have the same lack of inhibitions both in the bedroom and out.

Aries are born between March 21 and April 20.

If you feel like you’re on the cusp, check your birth time and input this into a free birth chart calculator online. This will tell you whether you’re an Aries, or if you just fall into Pisces or Taurus territory.