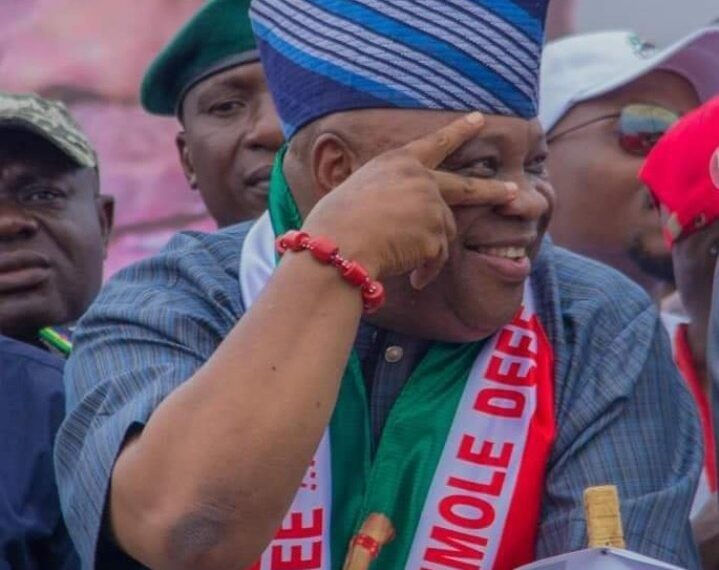 Osun State governor-elect Ademola Adeleke has admitted that there was over-voting in six polling units in the State of the Living Spring in the July 16 poll.

He, however, said the assertion contradicted a claim by incumbent Governor Adegboyega Oyetola that the over-voting was recorded in 750 units.

Newsmen report that YIAGA review on the election indicated the number of collected Permanent Voter Cards (PVCs) was slightly higher than the number of registered voters in those polling units.

Specifically, YIAGA spotted a difference of 1,882 PVCs in 30 polling units.

Last week, the Chief Press Secretary to the Governor, Ismail Omipidan, maintained that YIAGA report validated his claim that Governor Oyetola lost the vote count not the election.

In a statement through his spokesperson, Olawale Rasheed, Adeleke accused the governor of allegedly sponsoring posts that he (Adeleke) admitted that there was over-voting during the election and accused Oyetola of misinterpreting of facts before the tribunal.

He explained that, his defence at the tribunal disproved Oyetola’s claim of over-voting in 750 polling as it was created by the incomplete data of BVAS based on the unsynchronised BVAS report that was used by the petitioners.

The statement further affirmed that the false over-voting claim had nothing to do with the figures on the BVAS machine and the Forms EC8A, explaining that full statement of the governor-elect filed on oath at the tribunal was explicit and detailed.

It reads: “For the benefit of members of the public, there are two aspects to the defence with respect to APC’s claim of over-voting. The first aspect is that the over-voting in 750 polling units as claimed by Oyetola/APC in their petition is false over-voting created by the incomplete data of BVAS based on the unsynchronised BVAS report.

“This does not represent what is on the BVAS machine itself and the Forms EC8A. The correct result is as captured in the synchronised BVAS report which tallies with the data on the BVAS MACHINE itself.

“The defence also affirmed further that even if the false over-voting in the unsynchronised BVAS report is unlikely admitted, the PDP will still be leading if votes from the affected six polling units are removed, adding however that such admission is however impossible because the Tribunal will never rely on the unsynchronised BVAS report because is at variance with what is contained on the BVAS machine itself.

“From the analysis on the BVAS machine itself and the Form EC8A which are the primary source as against BVAS report which is secondary, real over-voting occurred in only six polling units.”