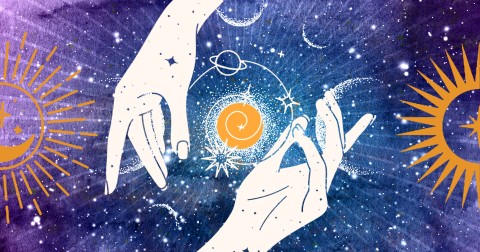 Mercury (the planet of communication) moves into Sagittarius this week.

Sagittarius is nothing if not honest, dare I say tactless and rude at times. You have to love them for it, they just say what everyone else is thinking.

This week, you might hear a lot of truth. Don’t resist it, judge it, or react badly to it. Maybe it’s a gift?

Ahead you’ll find your star sign’s tarot horoscope for November 13 to 19, with a card drawn and its meaning for you explained.

Tarot card for Aries for this week: The Lovers

Meaning: Someone you know is either cheating, trapped in a love triangle or wants to embroil you in one. Crikey, the drama!

The Lovers is often about temptation away from the straight and narrow, a clash of head vs heart decisions, feelings which are running to places they don’t belong.

Try to stay neutral. Listen without judgment. Don’t do anything silly that you will come to regret.

Tarot card for Taurus for this week: Eight of Cups

Meaning: People think you need to give up on something (or someone) but you are refusing to even face that possibility and are sweeping all of the ‘red flags’ under the carpet (there’s quite a bulge now).

Taurus, maybe you do need to look at this situation honestly and admit it’s been a disappointment.

The sooner you let it be what it is and invest your precious time elsewhere, the sooner that better opportunities will come along.

Believe in yourself, Gemini

Tarot card for Gemini for this week: King of Coins

Meaning: You are better than you think you are! I don’t know why you self-sabotage, put yourself down, duck the spotlight, think others know more or do a better job… they don’t.

People look up to you, think you’re great, believe you set the example.

Have more faith in yourself Gem. Listen to others when they tell you nice things, revel in the praise, don’t push it away.

You are the King of Coins – chin up and chest out.

Tarot card for Cancer for this week: Six of Swords

Meaning: The hard truth is that it’s time to go. You know it (you knew it ages ago) but they don’t and now you have to share the news.

The thing is, this has run its course, come to its natural conclusion and you are ready for new scenery.

The Six of Swords asks you to break the news this week, reveal where you’re at and what you want to do.

You can’t be responsible for how they’ll take it. Be kind, compassionate, but clear.

Take your time to make up your mind

Tarot card for Leo for this week: Two of Wands

Meaning: People think you’re flip flopping on them a bit – saying one thing but doing another, or changing your mind depending on who you’re talking to.

The Two of Wands shows that it’s because you’re not really sure how you feel about this situation.

That’s okay, that’s your right. Perhaps don’t say anymore until you have figured it out though, and then you can clarify your position and everyone knows where they stand.

Don’t add to the confusion till you know your own opinion firmly.

You can handle this, Virgo

Tarot card for Virgo for this week: Strength

Meaning: Just trust in yourself and that you can handle anything, because you can, Virgo.

Strength shows this is a powerful week of personal growth and development, you’ll be a different person by next Sunday: a stronger one.

This results from having honest, open and two-way conversations about the important things on your mind right now. Get them off your chest. Say your piece. Don’t back down. Listen to the response and go from there.

Tarot card for Libra for this week: Eight of Swords

Meaning: People think you’re stuck on a loop, repeating a habit or pattern that seems to be a blind spot to you.

It’s likely to be a projection of something you don’t like or want within your own realm that you’re projecting onto others. Maybe judging them for something you don’t feel comfortable with. Maybe acting as though there are barriers in your way which actually only exist in your imagination.

The Eight of Swords urges you to ask for feedback and act on it. Break a spell and escape a trap.

Someone has wronged you…

Tarot card for Scorpio for this week: Three of Swords

Meaning: Some foolish mortal has dared to betray or backstab you. They will regret it, I have no doubt, as you are the most vengeful and ‘never forgive, never forget’ star sign.

The Three of Swords reveals this knowledge will all be out in the open this week (though you already know it yourself).

Let them deal with their own shame and guilt. Surgically remove them from your life and move on. Don’t get drawn into games.

Tarot card for Sagittarius for this week: Knight of Cups

Meaning: You have a major secret admirer and they are going to show themselves this week!

If this is a romantic suitor, they could be a Water sign (Pisces, Scorpio, Cancer). Ditto if it’s a friendship opportunity. Perhaps, too, it could be a work offer or promotion or expansion of your role.

Someone thinks you’re fun, lively, energetic and ambitious (spot on!) and they want to draw closer to your powerful fiery energy.

Help out someone younger

Tarot card for Capricorn for this week: Page of Coins

Meaning: Someone younger, or more junior, than you needs your help and it’s up to you to spot their distress signals and pick the right moment to ask how they are. This could be a child, a friend or a colleague.

The Page of Coins reveals you can tell them the truth in the right way, putting things into context, helping them figure out their next step, and making it all seem better.

You are a practical, stoic character – lend them your strength.

Time to have some fun this week

Tarot card for Aquarius for this week: Three of Cups

Meaning: You are a bit tired of the hard slog, the seriousness, the never-ending chores and bills and bad news… and, actually, deep down, all you want is to have some fun! Tell them! Invite them into it!

We all need a lift. Life can’t be all work work work. You need, with the playful Three of Cups, a week filled with pleasure, treats and adventure.

Assemble your faves and prioritize having a good time, you deserve this, it’s rejuvenating. Don’t let anyone tell you different!

Tarot card for Pisces for this week: Four of Swords

Meaning: No one realises how deeply fatigued you are right now and how much you’re craving a break – even a mental vacation.

Pisces, you have to speak up and let them know. No one will mind, they will understand, they want to protect you.

This needs to be a week of deep rest, of relaxation, of getting some space and perspective about what’s been wearing you down.

When you stop and chill, better solutions and ideas will emerge.