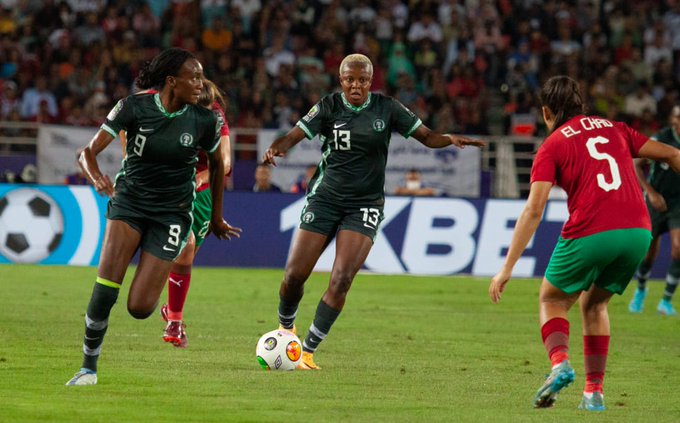 Hosts Morocco have qualified for a first ever WAFCON final after edging champions Super Falcons of Nigeria on penalties in Monday’s semi-final.

Nigeria’s Super Falcons will not be lifting a tenth title, just yet, after losing 5-4 on penalties to Morocco on Monday in a game that ended 1-1.

A determined performance saw the Super Falcons drag the game into extra-time and penalties despite losing two key players in the second half to red card offenses.

With Halimatu Ayinde and Rasheedat Ajibade getting their matching orders after a VAR review adjudged both players to have been culpable for dangerous tackles, the team held on for over 50 minutes more before losing gallantly to the Atlas Lionesses.

In the keenly contested encounter played at the Prince Moulay Abdellah Stadium in Rabat, the Lionesses of Atlas began the game on a high note – dominating ball possession as the Super Falcons were made to defend.

The North Africans had the first chance to score, however, Ghizlane Chhiri headed Ghizlane Chebbak’s cross over the bar. On the other hand, Ngozi Okobi profited from a nice pass from Halimatu Ayinde but shot wide.

Twelve minutes into the game, Okobi set up Ifeoma Onumonu but before the Gotham FC star could pull the trigger from close range, the ball was cleared away by Levante star Yasmin Mrabet.

Three minutes later, Onumonu had another opportunity to give Randy Waldrum’s side the lead – this time Nesryne El Chad was well positioned to prevent her from wreaking havoc.

Three minutes before the half time break, Nigeria had a penalty appeal waved off by referee Maria Rivet after Ajibade was fouled in the box by Hanane El Haj.

An incredible crowd for the semi-final between @EnMaroc and @NGSuper_Falcons sets a new record for attendance at an African women's football game! pic.twitter.com/jJTXHaYvzq

In the second half, Morroco continued from where they left things in the first 45 minutes. Sadly, the Falcons were reduced to ten players after Ayinde was given the marching orders for a dangerous tackle on Rosella Ayane after a VAR check.

The Atlas Lionesses almost took advantage of the Nigerians’ numerical disadvantage with Ashleigh Plumptre forced to make a timely goal-line clearance after Onome Ebi’s shot was sailing for her own net.

That lead lasted for four minutes as Sanaa Mssoudy restored parity for the home team. Goalkeeper Chiamaka Nnadozie’s save from Annie fell in the path of the ASFAR forward who slotted the ball inside an empty net.

Things got worse for Nigeria after they were reduced to nine players following Super Falcons star player – Ajibade’s foul on Zineb Redouani whicg6was also called by the VAR.

Morocco completed dominated the game but their major undoing was failing to convert the several begging opportunities that came their way coupled with the brilliance of women-of-the-match Nnadozie.

With nothing to separate both teams after extra time, kicks from the penalty spot were used to determine the eventual winners.

During the ensuing kicks, all players found the back of the net expect Nigeria’s Onumonu who had her shot saved by Er-Rmichi.

They will now face South Africa in the final on Friday.

The loss makes it the third time Nigeria will not feature in a WAFCON final since its inception. The other two occasions ended in third and fourth place finishes in 2008 and 2012 respectively, and Equatorial Guinea the eventual winners.