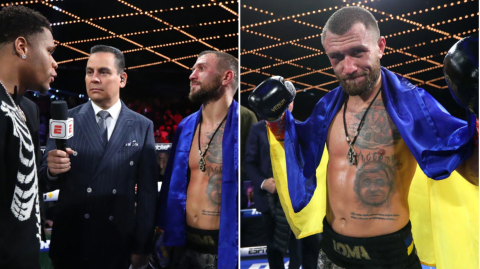 Vasiliy Lomachenko says he is ready for an undisputed title clash against Devin Haney after a hard-fought return victory over Jamaine Ortiz.

The 34-year-old was set to fight George Kambosos Jr for the WBO, WBA and IBF lightweight titles in the summer but withdrew from that showdown after electing to stay in Ukraine following the Russian invasion in February.

Lomachenko had enlisted in the territorial defense battalion but was back in the boxing ring on Saturday night to secure a unanimous decision win over Ortiz in New York City.

The double Olympic champion was given a thorough examination by his Puerto Rican opponent who opened up swelling over his eye early in the second round.

But the Ukrainian found his rhythm and marched on to secure the 17th win of his career.

In attendance was Haney, who stepped in to fight Kambosos Jr in Lomachenko’s absence during the summer to become the division’s heavyweight champion. He returned to Australia to defend his titles with a another dominant performance in October.

The undisputed champion was ringside to watch Lomachenko mark his comeback with a victory, with the returning fighter now eager for a chance to reclaim the lightweight titles he lost in 2020.

‘You know what motivated me. Four belts!’ said Lomachenko after defeating Ortiz. ‘I’m ready. I’m ready for any option.’

Haney meanwhile opened the door to negotiations to make the fight happen, joining Lomachenko in the ring after the final bell.

‘I think it wasn’t the best performance, but I know if me and Loma were to fight, we’d see a better version on the night. Congratulations, and hopefully we can get it on,’ Haney said.

Lomachenko is already a three-weight world champion having previously unified the WBA, WBC and WBO lightweight titles between 2018 and 2020 before losing the belts to Teofimo Lopez.

The former amateur star has since reeled off wins against Masayoshi Nakatani, Richard Commey and now Ortiz to position himself for another world title shot.