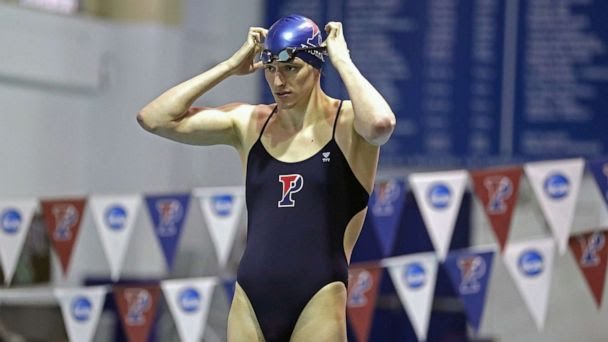 CONFUSION: Shame on them!’ UPenn is blasted for nominating controversial transgender swimmer Lia Thomas for NCAA’s ‘woman of the year’ award

The University of Pennsylvania has been blasted for nominating controversial transgender swimmer Lia Thomas for a top student sports’ award.

UPenn has named Thomas, 22, as one of two students it has nominated for the National College Athletics’ Association’s Woman (NCAA) of the Year Award.

The college’s other nominee is Russian tennis player Luliia Bryzgalova.

Each school is allowed two nominations as long as one of the athletes is an international student or a person of color and both must be graduating. The winner will be announced at an NCAA event in San Antonio, Texas, in January 2023.

Thomas, 22, made headlines at the beginning of swim season after parents and college swimming enthusiasts blanched at a transgender woman competing in women’s sports.

They say she has considerable biological advantages over rival swimmers born female.

But UPenn has plowed on with its nomination of Thomas regardless, despite frequent condemnation from fellow athletes and their families over her success.

‘Shame on them for nominating Lia Thomas,’ a conservative college organization Young America’s Foundation wrote on Twitter. ‘UPenn must have forgotten that in order to qualify for the NCAA Woman of the Year award, one must actually be a woman.

The award was established in 1991 and ‘recognizes female student-athletes who have exhausted their eligibility and distinguished themselves in their community.’

Although Thomas placed high on the leaderboard throughout the swim season, she only won the 500-yard freestyle at the championships.

Analysis subsequently uncovered suggested that Thomas was deliberately suppressing her performance to avoid a clean sweep of wins that would have further inflamed allegations of unfairness.

Throughout the season, many called for Thomas’ removal from the team, including from some of her teammates.