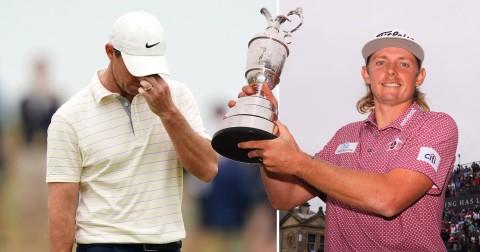 Rory McIlroy failed to end his eight-year wait for a major championship as Cameron Smith surged through the field to win the 150th Open at St Andrews.

Four-time major champion McIlroy had justified his tag as the pre-tournament favourite during the first three rounds at the Old Course, impressing from tee to green to sit joint-top with Viktor Hovland going into the final round.

But McIlroy’s fortune began to turn on Sunday as the Northern Irishman missed several birdie putts to extend his lead as Norway’s Hovland fell away.

McIlroy still managed to gain shots at the 5th and the 10th but saw his lead vanish as Australia’s Smith started the back nine with five successive birdies.

It was a putting masterclass from Players Championship winner Smith, who made a superb par on the 17th to maintain his one-shot lead over McIlroy before making a birdie on the last to shoot 64 and finish at 20 under.

With McIlroy missing another birdie putt on the 17th, he needed an eagle on the last to force a play-off with Smith but could only make par to finish two shots off the lead.

That saw McIlroy stay in third place as America’s Cameron Young made an eagle on the 18th to take the runners-up spot.

Smith, a former runner-up at the Masters, becomes the first Australian to win The Open since Greg Norman in 1993, while his score of 20 under is the lowest by a champion at St Andrews.

His 64 is the lowest final round by a champion at St Andrews and just one shy of the lowest in Open history, which was set by Henrik Stenson in 2016.

After lifting the Claret Jug, the 28-year-old said: ‘Wow – what a week. First and foremost I want to thank my team for all of their hard work.

‘It was awesome being out there in the mix. It’s just an unreal feeling to win here. This place is so cool. To walk away with the trophy is incredible.’