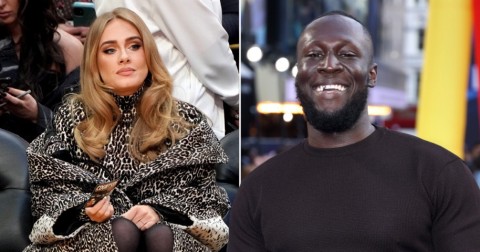 Stormzy didn’t act too big for his boots when he holidayed with his friend Adele – instead enjoying some quiet soul-searching in Jamaica.

‘It was deeply spiritual. We would sit by the pool all day and by the water and just talk and just have time with our feelings,’ the rapper recalled of his escape with the Rolling In The Deep singer.

‘I’d go to the water every day, and I’d pray. It just dawned on me that I had a lot of growing up to do. I feel like that’s when my life changed forever.’

Appearing on the cover of British GQ’s December/January issue, out on November 29, the south Londoner also addressed his 2019 split from Maya Jama.

‘I’d never experienced a break-up,’ he said. ‘And I never wanted to ever be in a position again where I felt what I was feeling.’

Stormzy, who returns with album This Is What I Mean at the end of the month, was at the MTV EMAs this week. And, no spliffs or buts, he takes performing seriously.

‘I go on the most intense diet. I get my trainer in. And I stop smoking weed because the best version of myself doesn’t smoke weed,’ said the musician, who will be toasted at tomorrow’s 25th GQ Men of the Year celebration with BOSS.