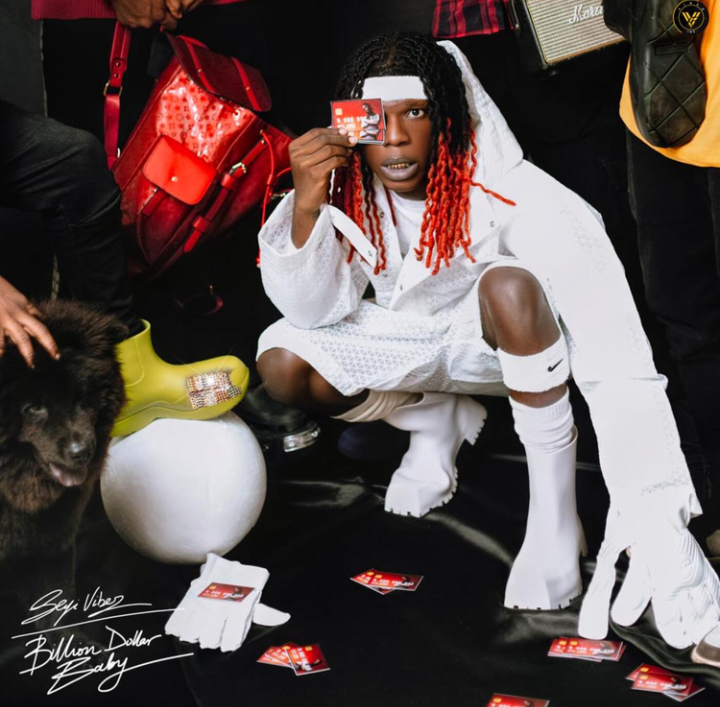 ‘Billion Dollar Baby’ retains sufficient identity that carries along existing listeners while providing the gratification needed to bring new listeners into the fold.

Street-Pop music is primarily driven by the documentation of both personal and everyday experiences across Nigerian streets. To achieve this street cadence, they deploy sonics that gleans from evergreen indigenous music such as Fuji, Tungba, and Apala and writing that adopts street vocabulary.

While talent and delivery are distinguishing factors, the core elements of sonic influences and vocabulary are threads that run through all of street pop.

Seyi Vibez is not a newcomer as he has dazzled listeners with his EP ‘No Seyi No Vibes NSNV)’ which showcased his credentials as one of the best talents Nigeria’s street-pop has to offer.

After establishing himself as a go-to street-pop artist for the primary consumers and getting some mainstream attention, Seyi Vibez makes a move for a larger audience with the release of his debut album ‘Billion Dollar Baby’.

In ‘Billion Dollar Baby’, Seyi Vibez combines street music cadence with pop appeal for a project as he makes a bold play for the mainstream.

These mainstream markers are on full display in Seyi Vibez’s ‘Billion Dollar Baby’ as he turned to Amapiano, street vocals, and tiny vocal tracts that carry significant street elements.

Billion Dollar Baby: A documentation of struggle, a celebration of success, and a yearning for love

After spending a couple of years as a beloved street-pop act whose music is primarily consumed by niche street audiences, Seyi Vibez has come of age. And in this album, he celebrates his success, individuality, and street-cred, while also showcasing his lover boy side in a bold play for the mainstream.

Documentation of struggle: On the opening track ‘BD Baby’, he talks about his struggles and how he biased through the difficulties and kept putting out music in his effort to avert failure. He uses the slang popularized by Yemi Alade to capture how he had to push himself to become a Billion Dollar Baby.

His struggles as a hustler appear even in love songs like in the Pop record ‘Ife’ where he said “as a hustler I gat to commot” which highlights his relentless hustles which he had to put before love.

In the Amapiano record ‘Saro’, he talks about his street smartness and not falling prey. Similarly in the speaker-rattling Amapiano jam, he said “When they ma sleep off, me I dey up” as he points to the sleepless nights he had to endure to find success.

“You’re on your own,” he says on ‘Billion Dollar’ highlighting the individuality of the struggle to succeed. In ‘Ten’ feat. Mayorkun, he talks about life in the trenches and the using music to make it out of the hood.

In between the struggle, Seyi Vibez always maintains a grateful, optimistic spirit, and a belief in God. In ‘Ten’ he says to give thanks to the almighty in every situation. in ‘Chance’, he reiterates that he’s protected by the blood of Jesus and in ‘BD Baby’ he asks that the angel of blessing gets to him. In ‘Bullion Van’ he says the popular Nigerian prayer by sending evil mechanizations back to the sender a prayer he repeated on ‘Bank of America’. In ‘Billion Dollar’, he prays for blessings in his endeavors, and in ‘Saro’ he talks about sitting on the Ark of the covenant.

These prayers and spiritual references are likely inspired by his religious upbringing as uses both Islamic and Christian references like in ‘Chance’ where he uses ‘Na Ham’ which is an Arabic response for a call and in the same song, he says he’s covered by the blood of Jesus. This suggests multiple religious influences or perhaps the choice to use both religions in his music similar to Fuji artists like King Saheed Osupa did in his song ‘Labalaba’.

Celebration of success: All through the album, Seyi Vibez celebrated the success that comes as a result of his sleepless nights and consistency. He calls himself a ‘Billion Dollar’ baby, an appellation that captures his success.

In ‘Chance’ he talks about having diamonds on him and in ‘Bank Of America’ he talks about popping expensive alcohol brands. In the love record ‘Darling’ feat. Simi, he talks about lavishing his money on a love interest. In ‘+234’ he celebrates his success and talks about enjoying his life on the low and how his pocket can never run dry.

A yearning for love: In ‘Billion Dollar Baby’, Seyi Vibez showcased his loverboy side even though it’s sometimes conveyed through a carefree and emotionally unavailable manner.

In ‘Darling’ feat Simi, he asks that his love interest reciprocate his love and his willingness to spare no cost to inspire her love. In ‘Ife’, he talks about not having enough time to offer the type of love required while acknowledging his feelings. In the Swing record ‘Gangsta’, he bears his heart admitting to being stunned by his own emotions.

The core street elements are present in the things he says (his writing), how he says them (his delivery), and the underlying influences of his songs (Fuji and music of White garment church).

The mainstream appeal appears in his use of Amapiano and crowd vocals which are predominant elements in the current Afrobeats soundscape.

An example of a song where both elements come together interestingly is ‘Chance (Na Ham)’ the Amapiano Jam which also uses crowd vocals, and a very street delivery style. In the single, the influence of Fuju which in turn possesses a massive underlying influence of Islamic recitation is evident as he somewhat deviated from the beat and began delivering a Fuji-Esque/Arabic recitation. The single also has repeated lyrics that make Amapiano a catchy tune.

The album also has several Amapiano records – ‘Ife’, ‘Saro’, ‘Chance’, ‘Billion Dollar’ ‘Bullion Van’, ‘+234’, and ‘Bank of America’. This is a collection of 7 Amapiano songs that draw similarities to Asake‘s ‘Mr. Money With The Vibes’ which thrives on Amapiano without sounding monotonous.

Similarly, some of the compositions carry significant similarities to Asake’s music especially his use of Fuji. For example, ‘Chance’ has a composition that is similar to Asake’s ‘Organise’, and ‘Saro’ is quite similar to ‘Nzaza’. While they have both been making music professionally for years now and Seyi Vibez might have even achieved some fame before Asake, the album that comes first will inevitably take precedence in a conversation of influence. Even more so as Asake redefined the use of Fuji unlike what the mainstream is used to in the Neo-fuji sounds of 9ice and Q.Dot.

Seyi Vibez interpolates a lot of spiritual phrases (Islamic and Christain) in his music which is a significant element of Fuji music which in turn influenced street music. Similarly, the way he delivers his melody, the rhyme scheme, and the flow pattern carry Fuji elements.

He uses crowd vocals, and backup vocals that switch from female in ‘Ife’, ‘Saro’, ‘Gangsta’, and ‘Bank of America’ to male vocals in ‘Ten’, and a mixture of both in ‘Chance’. These add harmony to the tracks he also adds adlibs in ‘Gangsta’ which shows his ability to use his voice.

The use of the baby vocal tract is a street element that runs through the album. When he samples Shola Allyson’s classic, ‘Eji Owura’ in ‘Ife’, he uses a baby vocal tract which is very common with street music, especially the street DJ mixes. This vocal manipulation appears in ‘Billion Dollar’, and in ‘Bullion Van’ where he interpolates Fela Anikilapo Kuti‘s “Water no get enemy”. It appears again in ‘+234’, in ‘Ten’ where Mayorkun interpolated 9ice‘s line in ‘Photocopy’. While this raw street element might be a little too much for some mainstream listeners, it stays true to its street identity.

Overall, Seyi Vibez was able to find a fine balance between core street sonics and mainstream elements with none overriding the other.

Topically, the album touches on his struggles, his success, and his yearning for love while carrying an underlining theme of you know what.

The Amapiano songs that congregate the album provide sonic coherence and enjoyability. And while the production was a bit raw in the use of baby tract vocals and his vocal rawness, these are elements that appeal to the street.

The album delivered great singles in the form of ‘Darling’, ‘Ife’, ‘Chance’, ‘Ten’, ‘Gangsta’, and ‘Bank of America’. And together they also make for a solid project.

The choice of Simi and Mayorkun for the album also positions Seyi Vibez to a new set of listeners as both artists have sizeable followership.

One thing is for sure, there’s more talent from where this project comes from and the Billion Dollar Baby can only get better.