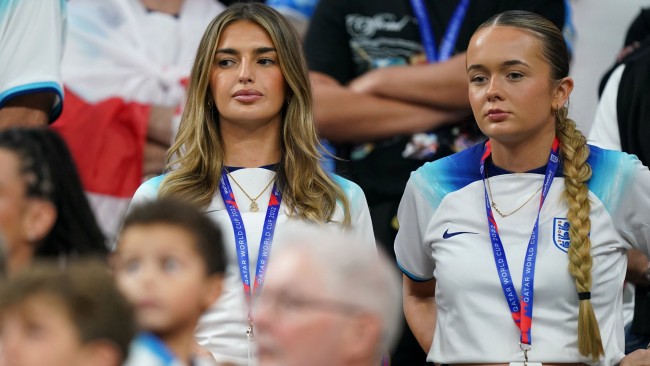 While the action on the field as England took on USA in the World Cup was lackluster to say the least, some of the players’ wives and girlfriends were nearby to offer their support.

The team drew 0-0 in an underwhelming stalemate on Friday night in Qatar, despite a previous victory against Iran.

But, with a refreshed team this time around, at least Gareth Southgate’s guys had their other halves there to cheer them on.

Off the pitch, the Wags are living the life of luxury onboard a £1billion boat which boasts royal suites, private pools, and spas.

While those who have gone there to cheer on their husbands and boyfriends have been posting photos of their holidays, a few of the Wags took to social media to throw their support behind the team ahead of the all-important game.

Sasha Attwood, who has been dating Manchester City winger Jack Grealish since they were teenagers, was spotted in the crowd at both of the England matches this week.

The model and influencer, who has more than 152k Instagram followers, turned up at the airport with a whopping 12 suitcases, but has mostly been seen wearing Team England merchandise while supporting her boyfriend.

On Friday night she watched the game alongside Jack’s sister Kiera.

The British Airways flight attendant has been posting plenty of photos in Qatar, including a bathroom selfie ahead of the match.

She also shared an image of her alongside some of the other Team England partners, including Bukayo Saka’s girlfriend Tolami Benson, who finally confirmed her relationship with the star after speculation that they were dating for months.

The girls made sure people knew who they were there supporting

Also with them was Arsenal player Ben White’s fiance Milly Adams, with all three women wearing jerseys with their partner’s names on the back for the game.

Paige Milian, the girlfriend of Chelsea star Raheem Sterling has been sharing lots from her time in Qatar, as well as photos of their kids wearing England jerseys.

The family of England captain Harry Kane are nearby too, with his wife Katie and their three kids in the stands taking in all the action.

Posting a photo from outside the stadium, Katie shared a snap of their two daughters Ivy and Vivienne.

The fitness instructor met her husband when they were just teenagers.

Back in England, Coleen Rooney made sure her and Wayne’s sons were ready to go for the game, laying out their jerseys on the sofa for their return from school.

Meanwhile, Wayne posted a photo from the 2018 World Cup in Russia of his family.

‘My favourite memory from England’s last big tournament. Watching as a fan with my family. Good luck to Harry Kane and the lads tonight. Come on England,’ he wrote.