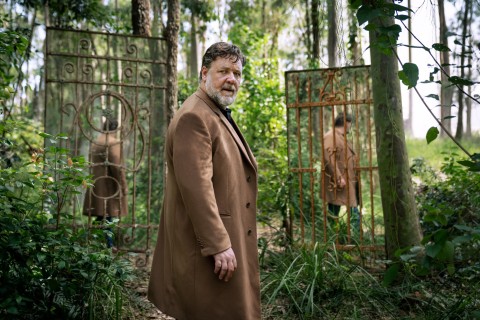 Gladiator Oscar-winner Russell Crowe is on a professional high right now. But sitting in front of me on Zoom, he’s not talking about success – his brilliant turn as a ladies-loving Zeus in Thor: Love And Thunder or his new double as a director and actor in the thriller Poker Face. No, Crowe wants to talk about his dad.

‘My father passed away early in 2021,’ he says. ‘The most usual conversation you have with people when you’re sharing that information is that if they’ve had the same sort of experience, of one of their parents passing, they lament, “If only I had one more weekend or one more dinner party or something”. In truth, I’d had 12 months of being with my dad.’

During lockdown, Crowe spent time with his old man on the 400-hectare New South Wales farm he bought in 1996 shortly after making his breakthrough film, LA Confidential.

‘Yes, he had his problems, a little bit of early-onset this and early-onset that,’ says Crowe. ‘But to share just little adventures was wonderful. Sticking him in a Polaris buggy and scooting through the backroads of the farm when it’s p*****g down with rain… it’s not something you’re supposed to do with an 85-year-old! After we did that, he said, “These people will tell you that was a bad thing to do. But I bloody loved it!”’

His beloved father John – a former movie-set caterer – died on March 30, 2021, just as Crowe was asked to direct Poker Face, after another filmmaker had left the project. A far cry from his stately 2014 directorial debut in The Water Diviner, this ‘very messy’ situation meant Crowe had just five weeks to prep.

‘The phone call comes, “Would you consider stepping into this situation?” It’s an insane, insane question. The answer should be, “No, of course, I would never consider doing something so ridiculous!” But I’m my father’s son.’

Crowe stepped in, concocting an intense chamber piece that casts him as Jake Foley, a tech billionaire who arranges a high-stakes poker game at his luxury, art-filled mansion with a bunch of so-called friends he is plotting against.

‘Truthfully, in the 12 months or so it took me to wrangle this bastard and get it finished, there were about ten thousand times when I’d have said, “What a fing idiot! Why did I say yes to this? It’s ridiculous! Too much pressure!”’

But Crowe kept on going, partly to keep his crew employed at the height of Covid. ‘I mean, it was a crazy thing to do. But I’m very glad I did it.’

Now 58 and with a bushy beard, the New Zealand-born Crowe seems a long way from the hot-tempered Hollywood A-lister of old. Calmer, for sure. Perhaps because almost 20 years spent parenting two sons (Charles and Tennyson, from his marriage to ex-wife Danielle Spencer) has mellowed him.

Now he’s the one passing on advice. ‘As you get a bit older, people look to you for some form of wisdom,’ he says. ‘I’m not necessarily sure that I’m the right sort of person to ask for wisdom.’

In the frame: Russell’s Rothko role

A piece by Mark Rothko, a famed American artist Russell is hoping to play next year

‘Am I an art lover? Absolutely I am. I have a very, very deep collection,’ says Russell Crowe.

‘Some of the pieces in Poker Face are mine. I’m trying to  show great wealth on the budget of a tiny little Australian independent film.

‘So there’s a lot of borrowed s*** in this movie – from galleries, from friends. Cars, paintings, watches – whatever – to try to bring the feeling of wealth into the movie.’

And Crowe isn’t done with the high art yet. Next year he’s hoping to play US painter Mark Rothko for British director Sam Taylor-Johnson. ‘It’s been pushed back a couple of times – I think that’s because the director is looking for a budget that allows a little bit more scale,’ he says.

‘So I’ll trust in her judgment on that because she’s very smart!’

Losing his father put things in perspective for Crowe – such as listening to what he had to say. ‘I, probably like most children, too readily dismissed a lot of my father’s homespun wisdom,’ he says. ‘In fact, the very last line of the movie was something that my dad said to my niece when she was going through a particularly hard period in life’.

The actor heard it again when he was editing the film, and even decided to give his father the final word. ‘My niece said it again at a memorial for my dad. And I just found it to be profound. Dad said, “Don’t be concerning yourself with people who judge whether the glass is half full or half empty. Just know, within yourself, that you can always refill the glass.”’