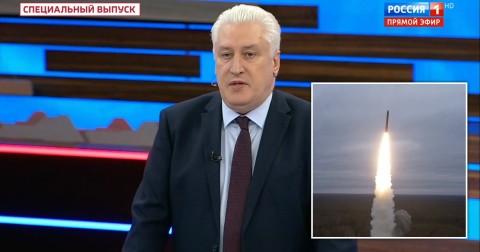 Igor Korotchenko claimed the British Isles would be swallowed up by the Atlantic Ocean if Moscow decided to attack.

The unhinged colonel and editor of Russia’s National Defence magazine also said that in place of a demolished America, there would be a sea strait named after Stalin.

This bluster comes after the Russian President oversaw a rehearsal for ‘massive nuclear strikes’ by land, sea and air.

Korotchenko said the tests – known as Thunder – were practicing ‘a massive nuclear missile strike in response to a first nuclear attack against Russia’.

He said: ‘Who could launch a first nuclear strike on Russia? The US and the UK. There is no compromise. The signal has been sent.’

Olga Skabeyeva, known as Putin’s ‘Iron Doll’, then got involved, asking Korotchenko: ‘So we have practiced today destroying the United States and once-Great Britain, right?’

He replied: ‘Absolutely right and… it all took place, I emphasize, after a first strike against us.’

The drills overseen by Putin involved the test-firing of a Yars land-based intercontinental ballistic missile and the launch of a Sineva ICBM from a nuclear submarine.

Similar nuclear exercises like these usually take place every year but Max Seddon, Moscow bureau chief for the Financial Times, tweeted: ‘They hold these every year, and Russia warned the US about them in advance.

‘But the last time Russia held one was in February – just a few days before invading Ukraine.’

Putin has reportedly grown fearful about setbacks on the frontline, meaning he could turn to more extreme measures to escalate the war.