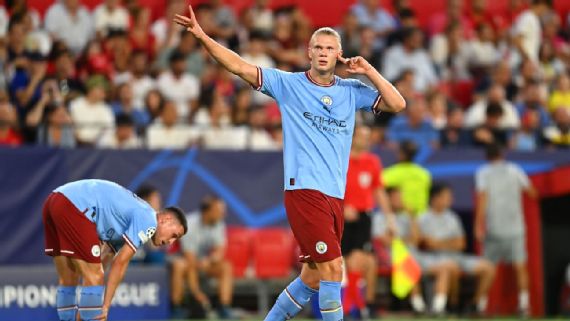 Erling Haaland is in contention to return for Manchester City for this weekend’s Premier League clash with Fulham.

The striker missed Saturday’s 1-0 win over Leicester City having struggled with a foot injury and a fever.

While he will not be risked for City’s Champions League dead rubber clash against Sevilla on Wednesday, he could be back in the starting XI for the visit of the Cottagers on Saturday afternoon.

Manager Pep Guardiola said: ‘He feels better but is still not 100 per cent. For tomorrow he is not available. We don’t want to take a risk.’

City have already qualified from their Champions League group as group winners – despite a 0-0 draw against Borussia Dortmund last time out where Riyad Mahrez missed a penalty.

Dortmund also progressed that night as group runners up.

Haaland has scored five times alone in three-and-a-half Champions League games this term, taking his tally for the season to 22 in all competitions.

Elsewhere, summer signing Kalvin Phillips continues to make progress in his recovery from shoulder surgery in September but is running out of time to prove his fitness for the World Cup.

‘He’s doing partial training sessions with the team but not contact yet. We’ll see his evolution,’ Guardiola said of the former Leeds United star.

A third consecutive game at home sees them take on Brentford in their final game before the World Cup, resuming their league campaign away to Leeds on 28 December.