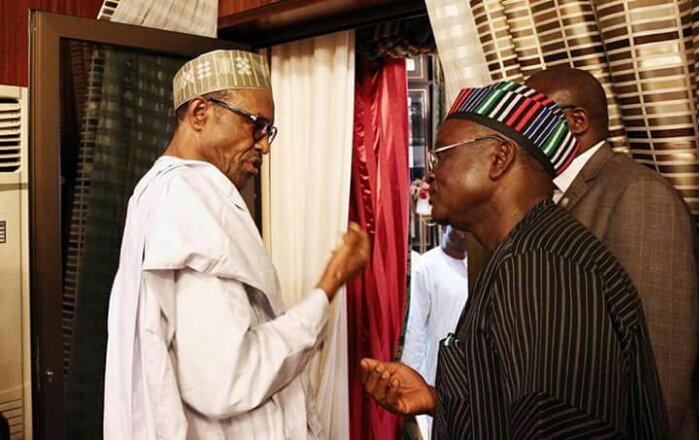 Benue State Governor, Samuel Ortom, has called on the American government and the international community to hold the President, Major General Mohammadu Buhari (retd), accountable for the spate of violence in Nigeria.

In a statement by his Senior Special Assistant on Diaspora Affairs, Rev. Peter Ichull, Ortom said the All Progressives Congress-led government should be held responsible if anything happened to him.

He made the call at the State Department, Washington DC, United States, while interacting with American officials.

Ortom, who left the shores of Nigeria penultimate Sunday for United Kingdom and later moved to the US, cited a series of threats he received and the attempt made on his life in March 2021, as signals that the Presidency was after him.

He pointed out that till date, those who attacked him had yet to be prosecuted.

The governor stated that he was at the State Department to present the traumatised Nigerian victims’ side of the story after discovering that wrong narratives were being circulated across the globe by the government of Buhari to shield itself from complicity.

He said the narrative of “herder-farmer clashes” was deliberately crafted to delay farmers’ doomsday until they were gradually wiped out and their ancestral lands confiscated.

“The truth is that the farming population in Nigeria is under siege and farmers are being decimated; agriculture is gradually dying and food security is being threatened,” he added.

Ortom alerted the international community not to take the insecurity in Nigeria with levity, stressing that the outbreak of war in any country would cause migration problems for America and Britain due to their friendly immigration policies.

He said in the last seven years, the Buhari administration had seen children rendered orphans, farmers displaced, and schools, hospitals and social services disrupted, without doing anything to restore normalcy, stating that the federal government’s punitive neglect had led to an increasing number of internally displaced persons in Benue State, which stood at more than 1.5 million.

He, however, called on the US and the rest of the international community to take serious steps to end the spate of violence in the country, especially in Benue State.

He asked the international community to demand accountability from Buhari’s government for the deaths of innocent citizens, suggesting that a special envoy to Nigeria to deal with the flashpoint of violence be appointed.

Responding, the US State Department officials, headed by the Under Secretary, Africa, and Middle East, Padgett Douglas, said, “The US government is aware of the random terrorism, weaponization of religion and importation of violence in Nigeria.”

He added that since the security of the political system was paramount to the US government, it had set up a conflict bureau to fund IDPs in Nigeria and assured that he would ensure that such funding did not go to the wrong channels.

Douglas also promised to make a case for the IDPs and investigate other issues raised by Ortom.

Meanwhile, a Senior Advocate of Nigeria, Chief Mike Ozekhome, said the Benue Governor was right in his statement indicting Buhari on the insecurity in the country.

This, according to him, is because he (Buhari) controls the entire security apparatus as the Commander-in-Chief of the Armed Forces of the country.

“Governor (Samuel) Ortom is right. The president should be held responsible for all security breaches in Nigeria. He is right for so many reasons. The first reason is that, as Harry Truman (America’s former president), once told us, ‘The buck stops on the President’s table’.

“He controls the entire security architecture in Nigeria and Buhari is an executive president, where all powers are held by one man and one man alone,” he said.

Ozekhome also accused Buhari of appointing the security chiefs in a lopsided manner, noting that he should bear the consequences of that decision.

Another senior lawyer, Mr Lekan Ojo (SAN), said though the President might be the GCFR, he could not be singled out and blamed for the insecurity in the country.

“As the President, he is also the Commander-in-chief of the armed forces. Everybody knows that what he is constitutionally expected to do is to create an enabling environment – to make adequate budget preparations, to fund the security architecture of the country – which he has done in my opinion.

“If you say ‘Government’, that is a different thing. The government goes beyond Buhari; it comprises the Executive at the federal level,” he said.

Meanwhile, a security expert, Mr Yemi Adeyemi, faulted Ojo’s stance, stating that the president should show the political will that he wanted insecurity to end in the country.

“Buhari should be blamed wholly for the insecurity in the country? Who else should we blame? It certainly cannot be the ordinary man without any political and constitutional powers to do anything.

“The President should deploy the armed forces to the red zones and attack these terrorists and flush them out of our lands.”