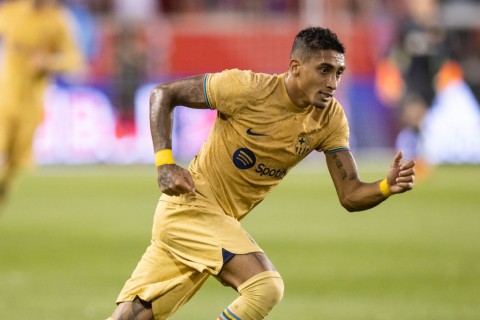 Raphinha is more than satisfied to have signed for Barcelona after his spell in England. Not even his inconsistent form so far is distracting him from his objective of succeeding at Camp Nou. He knew it would not be easy, but he is doing all he can to make it at the top level. He has recognised as much in an interview with Cadena Ser.

“On an individual level, it has been complicated because I am a forward and I like scoring,” he said. “I have scored one official goal this season and that affects you a little bit. I am adapting. Scoring only once is difficult, but my teammates are helping me and I am working hard to adapt as quickly as possible.”

In this sense, he highlights that he is happy working with coach Xavi Hernandez: “Really good, he is a reference as a player and is trying to stamp his mark and apply his ideas and make changes. We always play to win and we are going to fight for every trophy.”

The Brazil international lived Gerard Pique’s Camp Nou goodbye on the pitch on Saturday and said it “was special because it’s the adios of an idol, a reference. It’s difficult not to cry at moments like that, you always imagine it will happen to you one day, an emotional farewell.”

He added: “It seems far away, but the moment arrives for everyone. We lose a reference in Gerard. I didn’t see it coming, I didn’t know. It was his decision, he didn’t want to prepare us for it.”

“I like that all Brazilians dance, like Vinicius,” he said. “I don’t dance better than him! Ronaldinho and Neymar also dances and they don’t talk about them. We (Brazilians) always dance.”