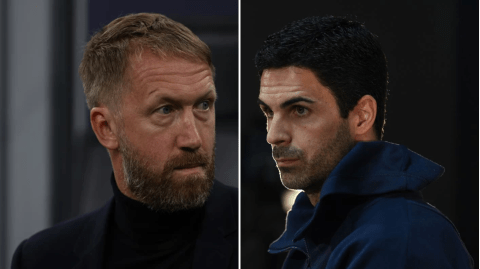 Kevin Campbell has claimed that none of Chelsea’s players are good enough to get into Arsenal’s team.

The London rivals meet at Stamford Bridge on Sunday in a clash that could prove pivotal in this season’s Premier League.

Arsenal are top of the table, 10 points ahead of Chelsea in sixth and are expected to continue their run at the top against a side still very much finding their feet under manager Graham Potter.

Both clubs are stacked with talent in all areas of the pitch, yet former Gunners striker Campbell believes that on current form a combined XI of Arsenal and Chelsea would be exclusively made up of the former’s players.

‘None at the moment,’ he told talkSPORT when asked how many Chelsea players would get into the Arsenal team.

‘I’ve got to say that. It is harsh, but the only one who you can say has played up to standard, up to scratch or maybe above is Kepa [Arrizabalaga].

‘Kepa has been outstanding, but I think when you look at what Arsenal have done this season, the numbers are where they are in the table, I don’t think any Chelsea player gets into that [team].

‘I am not saying Chelsea players are not top, when they are on fire probably more Chelsea players would get into this squad than Arsenal players, but they have just not been performing.’

While Chelsea have lost just one fixture in 11 since Potter took charge, performances have been less-than convincing, while injuries have not helped players stay consistent.

Kepa has impressed though, with the former outcast goalkeeper performing much better this season, keeping five clean sheets in 11 games though he will miss out against Arsenal thanks to a foot injury, with Edouard Mendy set to be back in goal.

‘It’s his [Kepa’s] plantar fascia [foot], so I don’t think he will play before the World Cup,’ Potter confirmed in his pre-match press conference on Friday.

Asked about Chelsea’s strong home record against Arsenal, he added: ‘I think recently it hasn’t gone so well unless I’m mistaken. So we have to do better there, that’s for sure.

‘It’s a London derby and anything can happen in the game. It’s that type of occasion. We want to be positive, play well, be on the front foot and get the crowd involved in the game. They’re our 12th player and that’s important for us.’