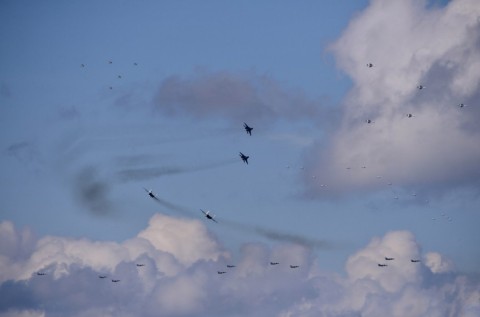 North Korea has flown warplanes dangerously near the border with South Korea, officials in Seoul have claimed.

Several F-35 jets and other warplanes were scrambled in response to the threat.

There were no reports of clashes between the rivals.

A ballistic missile has also been fired today, in yet another demonstration of Kim Jong-un’s recent barrage of weapons tests.

The Japanese Defence Ministry and prime minister’s office confirmed the news, with further details still yet to be released.

North Korea has ramped up missile testing in recent weeks, in response to US-led naval drills being held in close proximity to the country.

Tensions between the two Koreas continue to ramp up after a week of major activity from Pyongyang.

In response, South Korea scrambled 30 military planes to fend off the threat.

The night before, on October 5, South Korea had confirmed it had detected a launch towards its eastern waters, the sixth in just 12 days.

Pyongyang has fired more than 40 ballistic and cruise missiles over more than 20 launch events this year.

North Korea has made use of the stalled diplomacy with the United States and Russia’s war on Ukraine as a window to speed up arms development.