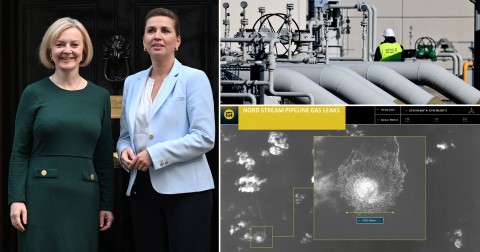 Liz Truss has said the series of explosions which caused leaks of Nord Stream 1 and 2 are ‘clearly acts of sabotage’.

The Prime Minister discussed the ruptures in the Russia-Germany gas supply lines with Denmark’s prime minister Mette Frederiksen during a meeting in No.10 today.

A matter of hours later, the Danish Energy Agency has said one of two ruptured natural gas pipelines appears to have stopped leaking natural gas.

The pressure appears to have stabilized after days of uncertainty.

While many western governments are yet to comment directly on the leak, many have pointed blame towards Russia.

Meanwhile, the Kremlin instead maintains the West are behind the ‘sabotage’.

Ms Truss and Ms Frederiksen discussed the ongoing investigation in their meeting today.

A Downing Street spokesperson said: ‘The leaders stressed the need to stay united in the face of Russia’s despicable action in Ukraine.

‘They agreed the incidents were clearly an act of sabotage. The prime minister offered the UK’s support for the ongoing investigation.’

Speaking to reporters outside No. 10, Ms Frederiksen said: ‘One of the reasons why I’m here today is because of the situation in the Baltic Sea, with Nord Stream 1 and 2.

‘I was able to give some details about what has happened in Denmark, or just outside Denmark.

‘Of course, it has been very important for me to underline that the Danish authorities have said that this is not an accident.

‘This is sabotage and it is critical infrastructure. So of course, this is a very serious situation.’

On Friday, Putin blamed the United States and its allies for damage caused to the pipelines.

US president Joe Biden responded by saying the leaks were a result of ‘a deliberate act of sabotage’ and added, ‘now the Russians are pumping out disinformation and lies’.

Russia’s ambassador told the UN Security Council the US had much to gain in gas trade from damage to the Nord Stream pipeline system but stopped short of blaming Washington.

The US has also responded by saying it would send send divers to find out what happened in the Nord Stream 1 and 2 pipes.

The pipes sit close to the Danish island of Bornholm.