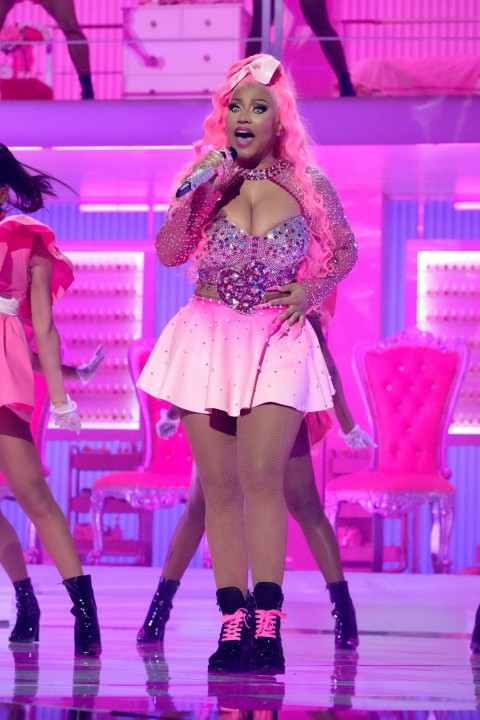 Nicki Minaj has fans wondering about a possible World Cup anthem after teasing a collaboration with Maluma and Myriam Fares.

The Super Freaky Girl rapper added a cryptic slide to the end of her latest reel on Instagram that thanked fans following her wins at the MTV EMAs.

Sharing a series of coloured football boots featuring numbers seemingly spelling out a date written on the side – this Friday, November 18 – the hitmaker alluded to new music relating to the upcoming football World Cup.

Alongside the numbers, Maluma and Myriam Fares’ names were printed on the boots along with Nicki’s.

As new music is generally dropped on a Friday, and with this Sunday marking the start of the controversial World Cup in Qatar, it certainly makes sense.

Yet to release any more details regarding a name, given the timing and the illustrations, fans quickly deduced the music would feature at some point during the 2022 tournament.

Oh yea, let’s add another one for tonight’s winnings. I love my babies so much. BEST HIP HOP ARTIST & BEST SONG! She’s TAKING IT!!!! Real fans in real life! Thank you for voting 🗳
love you 🦄🎀✨ https://t.co/QJZo18Ouav

The clues came after the hip-hop icon won big at the MTV EMAs in Germany on Sunday night.

Nicki won awards for best hip hop artist and best song for her track, Super Freaky Girl and took to her Twitter to share the good news.

She wrote: ‘Oh yea, let’s add another one for tonight’s winnings. I love my babies so much.

The post was met with an outpouring of well wishes and congratulations from Nicki supporters.

One fan posted: ‘QUEEN WE LOVE YOU SO MUCH YOU DESERVE EVERYTHING [sic]’.

More ‘congratulations’ and ‘deserved’ comments flooded in underneath the statement that received over 23,000 likes.

Earlier, the artist shared with i-D magazine why she knew Super Freaky Girl would be an instant hit.

Speaking with JT of City Girls she said: ‘I knew the song would make people happy.

‘Everything that feels nostalgic is making people feel better right now ‘cause we’ve had a couple of tough years.

‘Once I started writing it, it became easy and fun.