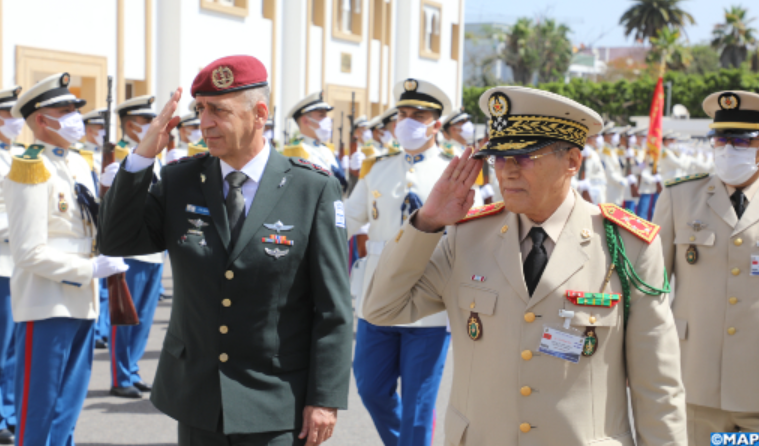 The meeting served as an opportunity for both countries to reaffirm their determination to boost military cooperation and exchange expertise in a variety of fields.

In the meeting, Loudyi reaffirmed Morocco’s commitment to combat security challenges, the migration crisis, and the COVID-19 pandemic.

The Israeli security official, for his part, commended Morocco’s important role in contributing to the region’s peace and stability.

The two officials also welcomed the quality of cooperation between the two countries’ militaries, reiterating their shared ambition to further advance collaboration in the field.

A statement from Morocco’s Royal Armed Forces (FAR)  said that the visit seeks to boost bilateral cooperation as part of the tripartite agreement between Israel, Morocco, and the US.

The three countries signed the agreement in December 2020, days after Morocco and Israel re-established diplomatic ties.

The agreement was followed by the signing of a Memorandum of Understanding in the field of defense on November 24, 2021, the statement recalled.

In addition to Loudyi, Morocco’s Lietuanal General, Inspector General of the FAR, and Commander of the Southern Zone also received the Israeli top security official.

During the meeting, the two military officials “expressed their satisfaction with the level of Morocco-Israel relations,” the FAR statement added.

The relations, the press release noted, are marked by the exchange of experiences and expertise.

The statement also recalled the participation of Israel’s army in the African Lion 2022 military exercises organized by Morocco and the US.

The communique concluded by emphasizing the importance of Moroccan-Israeli military cooperation, saying that officials from both countries examined the opportunities to “further develop” their collaboration.