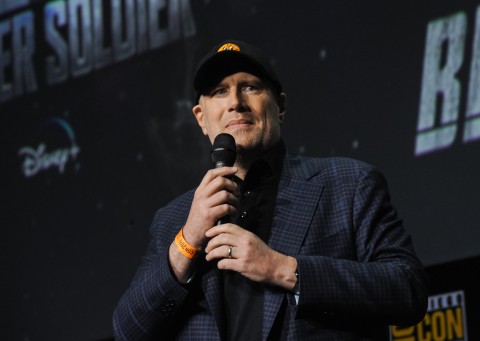 Marvel fans have gone wild for the studio’s epic new announcements at San Diego Comic Con, as it laid out its plans for Phase Five and Six of its superhero titles.

Fans will get to see releases from The Fantastic Four to Avengers: Secret Wars over the next few years, with the emotional trailer for Black Panther: Wakanda Forever also being released.

Marvel boss Kevin Feige sat on a ‘mega panel’ at SDCC to announce the huge projects incoming, which will see out Phase Five of the MCU and introduce Phase Six, the Multiverse Saga.

Kicking off the presentation, a series of Marvel’s greatest hits was shown on screen, with the late Stan Lee’s voice heard saying: ‘Marvel has always been and always will be a reflection of the world right outside our window.’

Here’s everything that was announced.

Directors Kat Coiro and Anu Valia, and head writer Jessica Gao, joined cast members Tatiana Maslany, Ginger Gonzaga and Jameela Jamil for a Q&A about the upcoming series, which will release on Disney+ on August 17.

The series will follow Jennifer Walters, an attorney specialising in superhuman cases, who also happens to be a hulk.

Of course, Mark Ruffalo will also make an appearance in the series.

We got new details and an emotional trailer for the second Black Panther film.

In the next film, Queen Ramonda (Angela Bassett) and co fight to protect Wakanda from other world powers in the wake of King T’Challa’s (Chadwick Boseman) death.

It’s set for release on November 11 this year.

Ant-Man and the Wasp: Quantumania

Paul Rudd will return as the superhero.

New details were revealed about Ant-Man and the Wasp: Quantumania, including a new trailer.

The film, which will kick off Phase Five, will see Paul Rudd return as the superhero and is set for release on February 17, 2023.

Guardians of the Galaxy Vol 3

James Gunn presented the trailer for the third Guardians film.

The third Guardians film also got a teaser, with director James Gunn confirming it will be the end of the story for the team.

He said: ‘I’m sorry, some stories have an end. It doesn’t mean everybody dies.’

In the teaser, Gamora (Zoe Saldana) is seen leading the Ravagers, while there looks to be a new focus on Rocket (Bradley Cooper).

They will be joined by Kingsley Ben-Adir, Emilia Clarke and Olivia Colman.

The series will stream on Disney+ in spring 2023.

Charlie Cox will return as Daredevil in She-Hulk before starring in his own new series, Daredevil: Born Again, after he made a surprise appearance in Spider-Man: No Way Home.

It will have an 18-episode first season and stream in spring 2024 on Disney+.

Not much information was given about Thunderbolts, which is set to be released on July 26, 2024.

However, it’s thought to be the culmination of Phase Five, and Marvel’s answer to the Suicide Squad.

Fantastic Four will kick off Phase Six of the MCU, and will release on November 8, 2024.

Phase Six will continue with Avengers: The Kang Dynasty, which will be released on May 2, 2025.

Details are thin on the ground currently, but fans are keen to see where more Avengers films can go.

Avengers: Secret Wars will conclude Phase Six of the MCU on November 7, 2025.

Feige confirmed to Deadline that the Russo brothers will not direct the next two Avengers films.