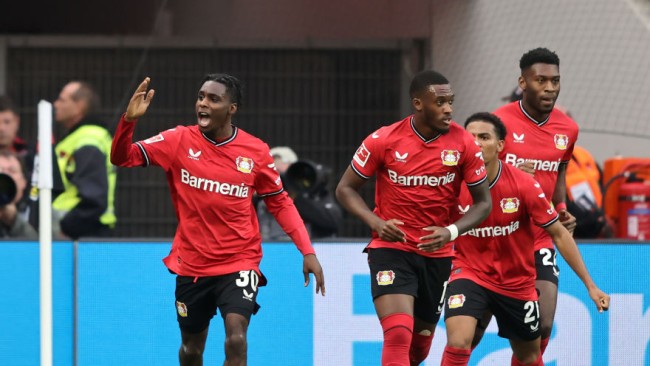 Manchester United have reportedly sent scouts to watch Jeremie Frimpong amid interest from ‘lots of clubs’ in the ex-Celtic and Manchester City man.

The 21-year-old Netherlands U21 international right-back has impressed at Bayer Leverkusen since joining the German club from Celtic last year in a £11.5m deal.

Frimpong has scored five goals across 11 Bundesliga games so far this season, while in the Champions League, he has two assists from his first three matches.

During his time in Glasgow, Frimpong made 51 appearances for Celtic and helped them secure a treble in 2019-20 – winning the Scottish Premiership, Scottish Cup and Scottish League Cup – and was named the club’s Young Player of the Year.

Frimpong started his career on the blue side of Manchester with City, where he progressed through their youth academy, spending nine years there in total.

But he did not make a first team appearance for Pep Guardiola’s side and departed in 2019, with Celtic paying just £300,000 for him.

He could now be set to return to Manchester with United – much like Jadon Sancho – who also spent time in City’s academy before moving to Old Trafford later in his career.

There are lot of clubs interested in Jeremie Frimpong. He has been pre-selected for Holland national team, and he scored again in the weekend 🔴👀 #transfers

Current deal expires in 2025 – Manchester United sent their scouts to follow him as per @Plettigoal, as many other clubs. pic.twitter.com/jCKDs4Smnt

But United face competition from ‘lots of clubs’ for his signature, according to transfer expert Fabrizio Romano.

‘There are lot of clubs interested in Jeremie Frimpong,’ Romano posted on Twitter. ‘He has been pre-selected for [the] Holland national team, and he scored again [at] the weekend.

‘Current deal expires in 2025 – Manchester United sent their scouts to follow him as per @Plettigoal, as [have] many other clubs.’

In total, Frimpong has made 46 Bundesliga appearances for Bayer Leverkusen, registering six goals and six assists.

It has been a tricky start to the 2022-23 season for his side, who are 15th in the Bundesliga after their opening 11 top-flight games.

United, meanwhile, are sixth in the Premier League after their first 11 matches, though they do have a game in hand over fourth-placed Newcastle and will go above them with a victory.