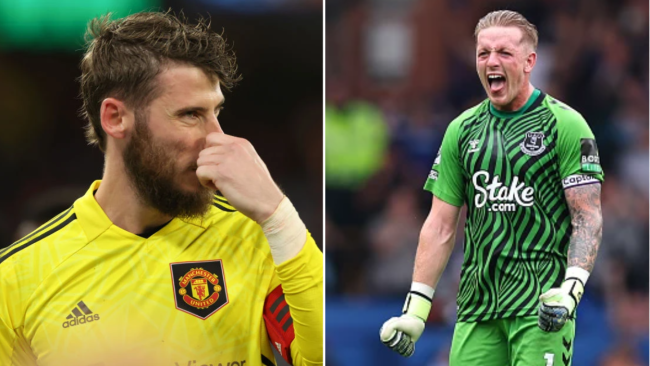 Manchester United are considering a move for Everton goalkeeper Jordan Pickford as the club contemplate allowing David De Gea to leave on a free transfer.

The 31-year-old is out of contract at the end of the season, though United have the option of extending his deal by a further 12 months.

The Spaniard is the club’s second highest earner behind Cristiano Ronaldo, earning a basic salary of around £350,000-a-week.

But De Gea’s performances have not reflected his status as one of the highest earners in world football and the former Atletico Madrid ace has made an indifferent start to the campaign.

Erik ten Hag is adamant that De Gea can play the sweeper-keeper role that he demands from his no1s but United have backtracked on playing out from the back since defeats to Brentford and Brighton.

In order for the Dutchman to play his brand of football, he needs a goalkeeper that is good with his feet to beat the opponents’ press.

That’s led United to scour the market for a new goalkeeper and the Telegraph say the club are now interested in Everton ace Pickford.

The England international is one of the best in the league with his feet, though there remains question marks over his handling and temperament.

But De Gea’s wages are another reason that the club are questioning his future after figures released this week showed the club have the highest wage bill in the Premier League.

United attempted to lower their wage bill in the summer with the release of Nemanja Matic, Paul Pogba, Edinson Cavani and Jesse Lingard, while Ronaldo is likely to leave at the end of the season.