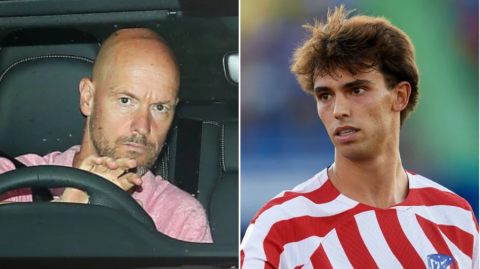 The struggling Premier League giants have embarked on an increasingly frantic late-window trolley dash as they seek to bolster Erik ten Hag’s struggling squad before the transfer deadline.

Ten Hag has been limited to just three signings so far this summer and has been frustrated in his attempts to bolster the two areas of his squad that critically need addressing.

An unhealthy reliance on midfielders Scott McTominay and Fred was brutally exposed in the defeats to Brighton and Brentford, while a forward line starved of confidence has failed to score in the opening two games of the season.

With Cristiano Ronaldo seemingly hellbent on leaving and Anthony Martial, who impressed in pre-season, out through injury United have earmarked the signing of a striker as a priority in the next fortnight.

United’s target have ranged from experienced journeymen who would represent a short-term fix, like Marko Arnautovic and Pierre-Emerick Aubameyang, to up and coming superstars like Felix.

The 22-year-old was firmly on United’s radar before he moved to Atletico three years ago but opted for a move to Spain from Benfica instead.

It has taken time for the forward to establish himself in Diego Simeone’s side but he is quickly beginning to fulfil the potential that marked him out as the new Cristiano Ronaldo when he broke through as a teenager at Benfica.

His performances last season prompted United, according to reports in Spain, to launch a £110million bid earlier this week which was swiftly rejected by Atletico.

The La Liga club responded to the intense speculation by posting a picture of their talisman on Twitter accompanied by the word ‘priceless’ seemingly taunting United’s attempts to snare their prize asset.

United also held an interest in Felix’s current teammate Matheus Cunha but his €100m release clause is likely to prove an obstacle, while the Brazilian is said to be unsure over a move to Old Trafford.

The same was the case for Ajax defender Jurrien Timber, who rejected United earlier in the window while his teammate Antony is also set to commit his future to the Dutch club.

A move, meanwhile, for Adrien Rabiot collapsed earlier this week after United failed to agree personal terms with the Juventus midfielder and the focus has quickly switched to attempting to sign Real Madrid’s Casemiro instead.