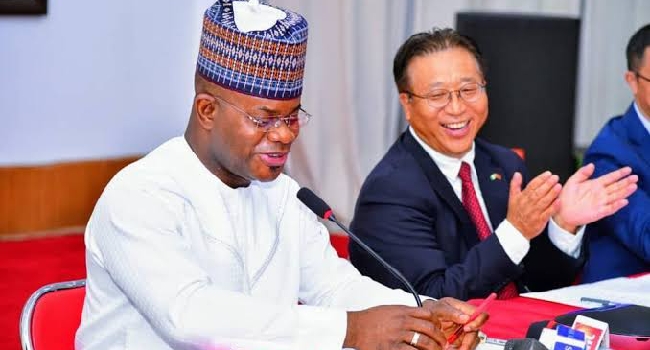 The Kogi State Government and China have met in efforts to develop their commercial ties, particularly in light of the state’s near-term goal of N591 billion in annual Internally Generated Revenue.

The groundwork for the new partnership was laid at a dialogue between Kogi State government and Chinese business people on trade and industry that was co-hosted by Governor Yahaya Bello and the Chinese Ambassador to Nigeria, Cui Jianchun, at the Chinese Embassy in Abuja, on Thursday.

Speaking to the business people, Governor Bello declared that the Kogi State government was prepared to interact with the Chinese business community in order to increase trade and investment prospects with China.

He claimed that for both countries to advance, there was a need for both parties to be eager, committed, ready, and sincere about working together to harness all resources—natural, human, and otherwise—for the benefit of both nations and humanity at large.

Bello noted that he shared a lot of political and personal ideologies with the Chinese people and added that there was political will to achieve the desired collaboration.

The governor acknowledged that there were tribes and religions in China, but claimed that despite these differences, the Chinese people were able to work together for the common objective of utilizing all of China’s resources.

The Governor stated, “I have that political will to continue to engage China and the Chinese, to ensure that all the benefits that are available for us, we take the full benefits of them for our people.”

Special Adviser to Kogi State Governor on Economy, Finance and Investment, Abdulkareem Siyaka, who also spoke to reporters, detailed how the state seeks to generate the N591.6bn Internal Generated Revenue.

“We are actually getting less than 10 per cent of what we should get from the resources that we have. About N591.6bn is the size of our IGR per annum if we are able to put all the building blocks together. So, the building blocks are what you have just seen. The Chinese today have invited us and they are willing to invest in various sectors of our economy,” he said.

Cui had earlier mentioned his recent trip to Kogi State and noted how similar China and Kogi State were.

He expressed happiness that the necessity for closer ties had been acknowledged by both the Chinese and Nigerian sides.

In the upcoming years, Cui expressed confidence that much would be accomplished with the assistance of the Bello in Kogi State leadership and the Chinese government, notably in the fields of nuclear energy and power plants.