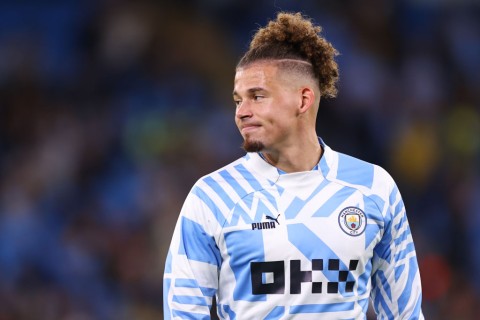 Kalvin Phillips faces a race to be fit enough in time for the World Cup with the England star set to have shoulder surgery.

Manchester City manager Pep Guardiola has revealed that he has had no choice but to send Phillips to surgery to deal with a recurring shoulder injury that has affected the player’s availability this season.

The defensive midfielder moved to the Etihad from Leeds in the summer for £45million but has yet to start for the Citizens, making just three substitute appearances so far, accumulating to just 13 minutes of football.

And after hurting his shoulder again in August’s mid-season friendly with Barcelona, Phillips was absent from City’s win at Wolves last Saturday.

‘But in a good way he can arrive for the World Cup. The doctor said the only solution right now is to do what he has to do. Now it will be not long but a little bit longer.

‘Every time it’s out [the shoulder], it’s out and doctors say that when you have three or four times where it’s out with the shoulder, the only solution is to have surgery.’

Earlier in the week, Phillips was named in the England squad for the upcoming Nations League games against Italy and Germany, the last International fixtures before the World Cup kicks-off in November.

He has now officially pulled out, and is now at risk of not making the plane to Qatar on account of fitness, something that could seriously hamper the Three Lions’ chances of bringing football home.

The 26-year-old was voted England player of the year for 2021, after starting every game of his country’s run to the Euros final, and has proven to be a key player in Gareth Southgate’s side.