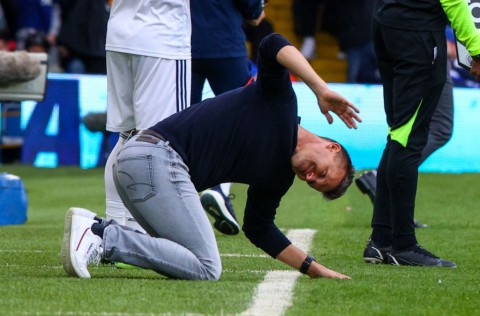 Leeds United manager Jesse Marsch is sick and tired of his team failing to get results, with the Yorkshire side in the Premier League relegation zone after four straight defeats.

It was a bright start to the season for the American, including a 3-0 win over Chelsea, but the wheels have come off somewhat and Leeds are now without a win in eight matches.

Things are not getting any easier, with Leeds going to Liverpool in the Premier League on Saturday, but Marsch is not lacking in passion, with his frustrations clear for the world to see in a press conference on Thursday.

‘I’m kind of angry right now,’ he said. ‘I’m tired of playing matches where we are in the match and in many cases better than the opponent and walking away with nothing.

‘I’m tired of not capitalizing on moments when we are the better team in matches and I’m tired of giving away goals too cheaply.

‘And I’m tired of not getting results we should be getting.

On how he intends to stop the slide, the former RB Leipzig boss said: ‘So I’m trying to figure out which guys can be counted on at the highest level right now.

‘What kind of decisions need to be made from a tactical perspective in terms of match plans. I need to help the group find their confidence.

‘I need to find out which guys are ready to fight for everything so that in these next matches we can get the points we need.’